Canada on the wrong side of smallest recordable margin; Zach Bell 2nd after two races of men’s omnium

The second event of the 2011 UCI Track Cycling World Cup Tour got underway today in Cali, Colombia, and the Canadian track cycling team were looking for more international success.

In the women’s team pursuit race, Canada’s team could not have been unluckier. In a tightly contested race, the team of Tara Whitten of Edmonton, Alta, Laura Brown of Vancouver, BC and Stephanie Roorda also Vancouver, missed their qualification to the final four and a shot at the podium by a mere one thousands of a second.

One thousand of a second (0.001) is the smallest recordable margin in track cycling. Canada’s trio stopped the clock at 3 minutes 25.674 seconds, while the German team posted a time of 3 minutes 25.673 seconds. 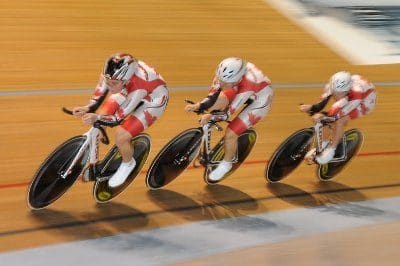