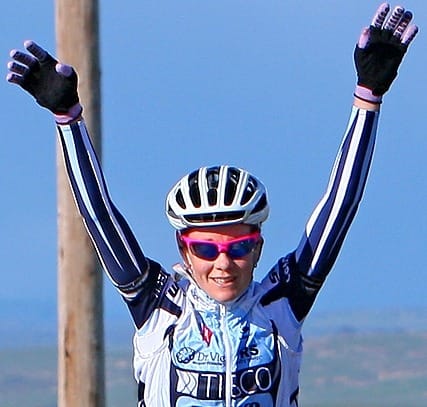 Merced, California – Team TIBCO Dr. Vie  women cyclists opened the 2011 season with a pair of races in Northern California to put into practice some of the tactics and teamwork they developed during training camp the past week. The results gave the team a strong start to the new campaign with Canadian elite cyclist Erinne Willock winning. 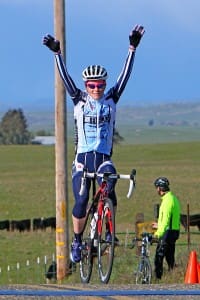 On Saturday, the Team worked hard to animate the Snelling Road Race with a steady string of attacks. However, the strong NorCal pro-1-2 field wouldn’t allow any breaks to establish.

“We tried to get a move going early but nothing stuck,” said Team Directeur Sportif Lisa Hunt.

Until the fourth of five laps on the roughly 12-mile circuit, when Team TIBCO’s Erinne Willock put in a dig and opened a gap with nearly 20 miles to go.

“Erinne went and never looked back,” Hunt said. The former Canadian Olympia put her head down and showed her strong time-trialing skills en route to a solo victory.

Behind her, the rest of the Team lined it up on the front of the pack and executed a perfect leadout to deliver sprinter Samantha Schneider to the front of the bunch sprint and a fine 2d place finish.

Dr. Vie interviewed Erinne before she left to the training camp in California. Erinne is based in Victoria, BC and has numerous wins under her belt including the 2008 Olympics.

A member of the Canadian National team since 2000, Erinne was introduced to the sport of cycling by her father (1984 Olympian Martin Willock) and was a member of the Victoria High School Cycling League from age 14. She is known for her ever-changing racing tactics and strength in the mountain stages. Erinne has been married to former professional cyclist Tony Zarsadias since 2006.

Congratulations Erinne, from Canada with love.