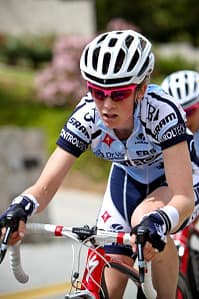 (Ottawa, ON – January 11, 2011) 2008 Olympian and 2012 Olympic hopeful  cyclist Erinne Willock of Victoria, British Columbia announced on Wednesday she will put her Olympic dreams on hold as she and husband  Tony Zarsadias are expecting the birth of their first child, only days before the start of the 2012 Olympic Games in London. Erinne had an amazing year on Dr. Vie’s Team Tibco through 2011. Watch Dr. Vie TV  interviews of Erinne during her races.

“The last couple months have been quite a bit different than I had envisioned since the last Olympics. To say I’ve switched gears is a big understatement.  I have very quickly gone from having complete focus for the 2012 Olympic year to now having a healthy and happy pregnancy being my new and exciting reality,” said Willock, who competed for Canada at the 2008 Olympic Summer Games in Beijing and at the 2006 and 2010 Commonwealth Games.

Willock, an integral member of the Canadian Women’s Road Cycling Team, boasts an impressive cycling resume, which includes several victories on the professional racing circuit and many Top 10 at UCI World Cups throughout her career.

“I will definitely miss racing in 2012, as this is such an important year. Nevertheless, I’ll be cheering on my teammates from both Team TIBCO and the Canadian Cycling Team. You can be sure that I’ll be glued to my computer and TV checking the latest results, race reports and live coverage. There is so much depth in women’s cycling right now, especially Canadian Cycling, that it will be a great year to be a fan,” continued Willock.

Speaking to her teammates of the Canadian Cycling Team, Willock is confident that Canada will thrive at the 2012 Olympic Games in London, this summer and bring home some medals.

“To my teammates on the Canadian Cycling Team, I want to wish you all the best of luck! I am very excited to watch you all excel. For those who are vying for those precious spots on the Olympic Team for London, I hope you enjoy the experience, and more importantly have medals to bring home to show me!”

Denise Kelly, head coach of the Canadian Road Cycling Team, will miss Willock in the peloton this summer. “Erinne is an undoubtedly an outstanding cyclist – one of Canada’s finest. Her outgoing personality and aggressive racing style will definitely be missed this summer in the peloton across the world, and I join the staff at the Canadian Cycling Association to wish her a safe and healthy pregnancy. We are looking forward to enhancing our development programs with this new cyclist that will be born this summer.”

Linda Jackson, coach and directeur sportif at Team TIBCO, also shares her joy for Erinne’s future new addition to her life. “Everyone at Team TIBCO is incredibly happy for Erinne. We want to congratulate her and Tony as they embark on this wonderful new experience. Erinne is a tremendous person and I’m sure we’ll miss her talent and leadership this year, but there are more important things in life than racing a bike. We wish Erinne and her baby all the health in the world.” Dr. Vie sponsor of Erinne on Team Tibco states ” Erinne was amazing last year. Not only is she a super athlete, but also a loving person. She will make an fantastic mother.”

Member of the 2006 and 2010 Canadian Commonwealth Games Cycling Team

Winner of the 2011 Women’s Prestige Series