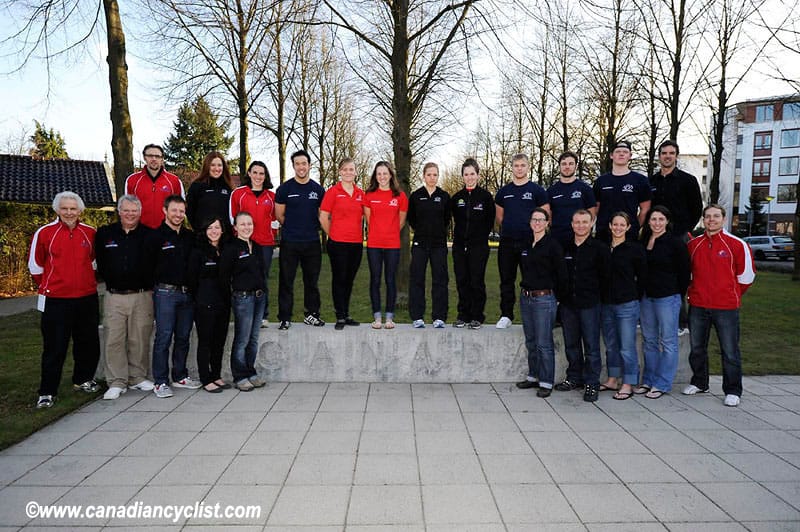 At one year out from the London 2012 Olympics, the competition at this year’s World Championships in Apeldoorn, Netherlands was intense. There were 16 teams competing in the women’s team pursuit, with Great Britain winning with a time of 3:23.419.

This year’s worlds was unique in many ways. Our Canadian Track Team has grown many times its original size from a few years ago; women’s team pursuit almost doubling. We had development riders joining us just for the experience (Jasmin) and a brand new men’s team sprint. A reigning 2-time World Champion. We had 13 staff and coaches and they were all incredible. The Canadian Track Cycling group is truly something special and packed full of good people. I have never seen cycling in Canada rise to this sort of level before. I had complete trust in all those surrounding me so that all I had to do on race day was get on my bike and ride as hard as I possibly could.

We had trials a few days before we raced to pick the team that was to start the qualifier. Having to choose an alternate is never easy, but now with four women on the WTP, we need to determine who would ride each race from now on. The accomplishments at the World Cups and experience I have gained racing on WTP and training with Steph Roorda over the past couple of years has been invaluable and it was hard to see her sit this one out. It was the first time Tara Whitten and myself race with Clara Hughes and I think what we accomplished this year is a good place to start. We managed to ride well, even though we started in an order in which we had not practiced. I was hoping we would qualify for medal rounds and improve upon last years time and placing – but 6th in the World the year before the Olympics is a motivating place to be. We have four world class riders now that can be called upon and I think with just that, we are going to only get better and better. We have a lot of work to do, but I feel that we are on the cusp on getting it right and breaking Canadian records once again.

Make sure to stay tuned until March 27th to see how the rest of the Canadian gang does at this years Worlds.

I will now make my way back to Vancouver to catch up with our very own Local Ride/Dr. Vie Superfoods+ team. I am excited to get on the road and have a great start to the road racing season with this group of women. I want to thank everyone for all their support during this year’s track cycling season. See you soon!