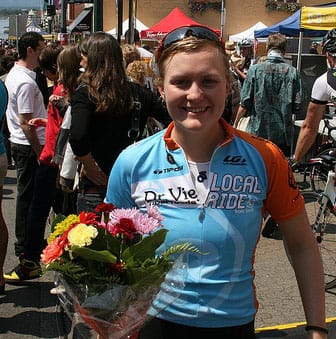 Dr. Vie Superfoods+ Elite Women’s Cycling Team with Local Ride in BC has continued to make an impact all over the world this spring, including on the fabulous cycling routes of the squad’s HQ in Maple Ridge, BC, for  Local Ride Bike Shop’s ninth annual Race the Ridge. The squad also took its campaign to the U.S. Pacific Northwest for the Tour of Walla Walla and Mutual of Enumclaw stage races. Team members Jenny, Jasmin, and Jessica are currently learning the ropes of elite women’s cycling in Europe, while Steph and Laura made waves in the BC Capital during last weekend’s Victoria International Cycling Festival. The racing season is heating up. Read more about what these inspiring women have been up to this past month!

Steph, Laura, Rachel, and Mechanic Dave jumped across the Georgia Strait for some road cycling action last weekend in the provincial captial. On Saturday, Dave took on his second Gran Fondo ride, the 140km Tour de Victoria after getting the “Fondo Bug” last year with his successful completion of the RBC Whistler Gran Fondo. Dave did it again, cruising along some of the Island’s most beautiful roads and over the grueling hills of the Highlands to finish in a time of 6 hours, 18 minutes.

Then, on Sunday, Dave was back in his usual role of race team mechanic for the Victoria International Cycling Festival. Steph and Laura placed a solid first and fourth, respectively, in the time trial. Steph continued to display the impressive acceleration and grit she has been showing all season to take third in the criterium. Read Dave’s Tour de Victoria report HERE. Check out photos from the criterium HERE.

Jenny, Jessica, and Jasmin of the Local Ride/Dr. Vie Superfoods+ squad are currently in Europe on a Team BC project, learning what it’s like to ride in the fast lane, a.k.a. race with the top women in Europe and beyond. Read their most recent race reports HERE

While most of the team headed to Europe to get a taste of racing over there, Steph and Laura drove down to Enumclaw, WA for the annual Mutual of Enumclaw Stage Race. Laura finished second in the time trial with a time of 14:17, while Steph won some primes and took third in the crit. She worked hard in the road race to help defend the team’s GC placing and Laura wound up fourth overall. Local Ride/Dr. Vie’s Maggie stole the show when she swept all three stages to take a commanding win in the Junior D girl’s category. Way to go ladies! Read Laura’s race report HERE.

With a second place in the nine-mile time trial, the first stage of the Wenatchee Omnium, Local Ride/Dr. Vie Superfoods+ rider Jessica was primed to battle for the overall, but a crash in the rainy stage 2 criterium put a damper on things. Jessica went on to win the final stage road race solo, but it wasn’t quite enough to earn her the overall win, and she had to settle for second spot. It was a monumental effort and Jessica continues to impress as she gives her all in every event she enters. Rachel also had a solid weekend, logging a top-10 in the general classification. Read Jessica’s full resport HERE.

Local Ride Bike Shop’s Ninth Annual Race the Ridge saw a record number of participants in its three-event stage race. The Local Ride/Dr. Vie Superfoods+ Team unveiled flashy new orange and blue team uniforms just in time for a strong debut in the team’s competitive hometown race. The squad definitely made a statement, with a different team member picking up the win in each of the three stages and Jasmin snagging the overall victory. Read Jasmin’s report HERE and the full press release HERE. Full results HERE.

We are so proud of our girls as they race around our globe. Come meet them at the Canadian Road Cycling Championships in Burlington Ontario 23-26 June 2011. Hang out a our tent, get tips from these professional cyclists who are taking Canada and the world by storm. They are amazing role models and we are honoured to share their lives.