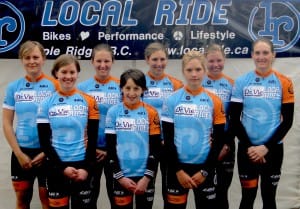 Dr. Vie Local Ride team from BC is heavy into UCI European races this month.  These young women are making great strides competing side by side with the top womens racers at some of the toughest terrains for road cycling. They race during the day and travel overnight to the next race town during a heavy summer season of Europen racing. Read all about it direct from Jasmin, one of our cyclists who sends us her first hand report:

“Our second UCI race of the trip in Gooik, Belgium was nothing if not a definite improvement from our experience in Holland. Featuring the trademarks of the Flanders region, cobbles and steep climbs, it proved to be selective based more on fitness than purely a survival of the best positioned.  This suited my teammates, again including two additions from Horizon Fitness, and myself just fine, as we all had the beating we took in Holland still seared quite painfully in our memories.  The course consisted of one long lap with three major climbs, including one cobbled one, the Bosberg, as well as a finishing circuit of seven laps which again included some uphill gradient.  With a relatively relaxed start, the peloton stayed together until the Bosberg where it shattered apart and many riders were never to be seen again for the remainder of the race.  It was for sure a unique experience to race up a cobbled climb; with riders faltering right and left and the crest at the top just barely visible, the race was really to avoid the casualties and remain in contact with the main group.  Not too mention to avoid succumbing to the eerie sound of your own bones rattling in their sockets from pounding over a surface that resembled a blown-up minefield.  Sadly the relief that came with successfully conquering this momentous part of the race was short lived as the next climb, albeit cobble free, came almost immediately after, followed suit by a dust-billowing and long-winding cobble stretch leading up to the base of the third and final climb. By the end of the long loop the main group contained Claire and myself, and through a heroic effort, Jess managed to chase on and join in the party.  Jenny commandeered a small chase pack but unfortunately they did not prove very useful to her and the group was pulled shortly after completing the first of seven finishing loops.

After re-fuelling and resting our legs after an exhausting day of racing yesterday, we headed off to our next race, a 98km kermesse in Begijnendijk. Just over 70 women lined up to race 14 laps of a 7km flat circuit. Luckily, we managed to start the race at the front of the pack, otherwise we may not have heard the race organizer announce, in Flemish, that there would be a 10 Euro prime for every lap. The race took off pretty easy for the first lap until the prime sprint, which I managed to scoop up. Shortly after, Jasmin also managed to win a prime. Next it was Jess’s turn to cause a stir at the front of the pack, launching several powerful attacks, however, being early in the race, her efforts were shut down by fresh legs.

Throughout the remainder of the race, despite relentless attacking, there were no significant breaks that lasted more than a lap, creating a steady, fast pace. Our legs were definitely feeling the effects of racing two days in a row, however, Jasmin and I both won another prime. Unfortunately, amidst my suffering, I was unable to find the lap board, nor was I able to understand the announcer’s Flemish, so, I had no idea how many laps were remaining, until I missed out on the sprint. Needless to say, I still have much to learn! We hope to salvage as much rest as we can before lining up with the top teams again in Holland for what is considered the women’s Paris-Roubaix! Many thanks to all of those who have contributed to this amazing experience.

Over the course of the finishing circuit Marianne Vos demonstrated her superior prowess by breaking away solo and in the end gained over five minutes on the group.  Surviving bucket loads more of attacks and the searing sun that relentlessly depleted our hydration to dangerous levels, Claire and I rolled in with the main chase group, with Jess finishing just off the back.  After 132 grueling kilometers the initial group of 130 saw 61 finishers including three out of five team members, more importantly though, it installed confidence in the BC crew here that despite the gap of inexperience we still have to overcome, our European counterparts are human too, and except perhaps for Vos, invincibility is not a standard attribute.

Nothing for it but to jump right back on another start line today, in Begijnendijk, before driving to Holland tomorrow for our next UCI race on Sunday.  Its true what they say about racing in Europe; you either love it or you don’t, but personally, I find myself on the middle ground where, although not a fan of getting pushed and shoved around, I am fully appreciative of the benefits that this style of racing has on offer, and therefore, I am reveling in the experience and looking forward to emerging a stronger and more capable rider.

As such I would, as always, like to extend a truly sincere thank you to all the sponsors and supporters that are enabling this opportunity.  Through your help my team mates and I are the fortunate recipients of invaluable experience and are making great headway towards accomplishing our respective goals in this sport!

Meet some of our amazing young women when they return to Canada to compete in the Canadian National Road Cycling Championshps 23-26 June in Burlington Ontario. Drop by our tent, meet our girls, hear their stories and get tips from them.

With love to our amazing young women cyclists