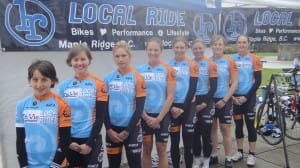 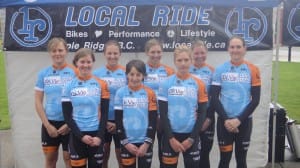 Dr Vie Superfoods+ British Columbia, Canada, team of women cyclists started a new chapter in what has been a successful inaugural season for the team by tackling the opening race of BC Superweek at the lower mainland’s Tour de Delta  weekend.  Despite being short one teammate and having another just overcoming illness, they were not to be fazed and were determined to start matters on a good note at Friday’s MK Delta Criterium. A tough course made for a hard night’s racing and despite valiant efforts on everyone’s part, they were edged out at the line in the bunch sprint to have to content themselves with a third place finish.

The next evening at Ladner’s Brenco Criterium, Dr. Vie Superfoods+ team of young women stepped up their game and they were able to launch two riders up the road as part of a four women break early on.  While these young women were keeping busy, eventually lapping the field, the main pack did not let up as Dr. Vie Superfoods+ team  put on a dominating performance to win more than half the field primes, and there were many, before winning the bunch sprint for fifth.  This left the four escapees to contest the last three laps by themselves, with the overall winner narrowly taking another win, and Dr. Vie Superfoods+ women raking up second and fourth.

Sunday morning was do or die at the White Spot Road Race as Dr. Vie Superfoods+ women were determined to finally claim that elusive overall win.  These incredible young women worked well as a team, getting one rider in an early break that would set the tone for what was to be a tactically demanding race.  It was frustrating to be a marked team and have all attacks immediately flagged down and brought back, but that’s part of the game and with two laps to go Dr. Vie Superfoods+ team  decided that it was time to pull out the big guns and make a final play to upset the standings.

Through a tremendous team effort these incredible women launched one final attack up the course’s only climb, and with no one able to match this initial acceleration, it allowed one of the women to ride off and stay away to take the stage win.  In the end, with the overall being decided with an omnium format, it wasn’t enough to overtake the leader, but in light of the herculean effort that every one of these young women put forth, there was nevertheless a positive spirit to finish off the racing.

With Superweek recommencing on Tuesday, Dr. Vie Superfoods+ team got a short break to unwind and rest up before continuing on what was sure to be an epic week of riding ahead!

This personal report was provided by our very own Jasmin Glassaer, an amazing young woman on our Dr. Vie Superfoods+ team in Vancouver. To watch Dr. Vie’s interview of Jasmin at the Canadian National Road Championships in Ontario in June click here and select 25 June race.

I am honoured to support these young women as they train and race around our planet on our Dr. Vie Superfoods + team to realise their dream. Our youngest rider is Maggie, just 11 years old. Come meet our young women in Bromont 9-13 August when they race at the Canadian National Track Championships.  Laura Brown & Steph Roorda are two of Canadas elite track cyclists and current medalists on Team Pursuit.

On Team Pursuit Laura and Steph ride with another of my athletes Tara Whitten 3 time world champion. Tara rides on my Dr. Vie Tibco USA team

We invite you to join us in Bromont shortly to watch an amazing series of races on the velodrome track used at the Atlanta Olympics. To watch my interviews with Laura, Steph and Tara at last years race, click here and select Tara Whitten, Laura Brown, Steph Team Pursuit,

We wish our Dr. Vie Superfoods+ team of women the very best as they train and race around our planet.