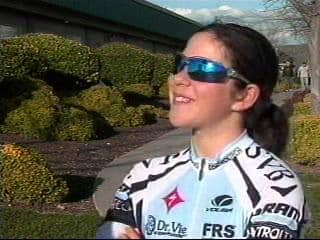 Aliya Traficante isn’t your typical eighth grader.  The 13-year-old from Cohasset says she has never played a video game.  And while most other kids her age will spend summer vacation relaxing, Aliya will pedal down a different path.  Action News reporter Rick Carhart has her story in tonight’s Kids In Action.

Thirteen-year-old Aliya Traficante has come a long way in the sport of cycling in the last year and a half.

Aliya says, “the first race was kind of bad for me, I didn’t like it…my mountain bike could only shift up.”

But once she got a taste of racing, she was hooked.

Aliya’s Mother, Rachel, says, “it’s the first time I’ve seen her so determined to follow through with something.”

Aliya is homeschooled, giving her more time on her bike, which is where she most wants to be.

Aliya says, “it’s a lot of fun, I really enjoy it…it’s like one of my best friends.”

This year, she set her sights even higher. She earned a spot on the junior squad of Team Tibco Dr Vie Superfoods, a professional womens team, and is trying to qualify for the Junior Nationals this summer in Georgia.

Aliya says, “it means that all of my training and working hard and enjoying riding my bike has paid off.”

But it’s not an inexpensive process. Travel and entrance fees add up quickly, and just flying across country is tougher than it used to be.

Rachel says, “people are telling me it’s as much money as a ticket to ship a bike at this point.”

So last weekend the local cycling community geared up to help raise money for this young phenom. Three different races were held in Butte County, with proceeds going to pay for her expenses.

Aliya says, “I feel very supported, like they want me to go somewhere and they’re excited to see me doing something.”

And she’s fortunate to have help close by. Her stepfather has been working with world class athletes for years.

Mark Wolford says, “I had the opportunity to train a lot of top athletes in ski racing, and she has some talents that are not common.”

A good coach, a loving family, and a supportive cycling community all combine to give this talented teen a smooth road to travel.

Rachel says, “any Mom would be proud of a daughter like that. She’s wonderful. It’s not just the cycling, she’s an awesome student, she’s a great kid in general.”

You can follow Aliya’s road to nationals on her blog, and you can also donate to her efforts there. Just go to our web sites and click on News Links. And if you know a young person who should be featured on our sunday ‘Kids In Action’, you’ll find the nomination form on our web sites.

“Aliya is a great role model for children around our planet.  We are thrilled to be supporting a youngster of her caliber,” says Dr. Vie.  To watch the TV interview on Aliya cick here.