Anniston, AL – Samantha Schneider of Dr. Vie Team TIBCO/To the Top won the bunch sprint to take 2nd place in the Sunny King Criterium in Anniston, Alabama. Schneider’s teammates Meredith Miller and Jennifer Wheeler helped put her in good position for the uphill drag to the line, and Schneider showed her speed with a clear sprint win.

The contest turned into a race for 2nd place when eventual winner Janel Holcomb countered a move by her Colavita teammate Andrea Dvorak with about 20 minutes left in the race. She was able to open a gap on the field, and hold it to the line.

Dvorak’s move looked to be dangerous until Miller initiated a chase that drew out Robin Farina (Rouse) and several other riders. That move came back but Miller stayed on the front for several laps, helping to cut Dvorak’s gap on the field.

With the gap coming down and a pair of mid-race primes coming, the pace quickened and the field began to pop riders off the back. Just after the mid-point of the race, Dvorak was caught and Holcomb countered immediately.

“Janel jumped on the back side, and she just got away,” Miller said. “It was still just over half the race to go. I was like, ‘Okay, we have time. We can bring her back.’ But nobody wanted to do anything to make that happen.”

“We knew Colavita would attack early,” said Team Directeur Sportif Lisa Hunt. “But we were going to be patient depending on who they sent up the road. You know, it seemed like Colavita controlled really well. They had six riders to our three, and they did a good job of using their numbers.”

Holcomb’s gap would grow out to just over 0:30 while the TIBCO-led chase began to pare it back. But with little help from the rest of the field, the gap went out again.

We did what we could,” Schneider added. “We would get off and (Colavita) would shut it down. Meredith and Jennifer did a lot, and there was just no chance Colavita was going to let them get away. Once the break was established and the gap was growing, we reevaluated things.”

“We knew we would need to go for a field sprint,” Schneider said. “Meredith and I hooked up in the last few laps and went with the plan that she would lead me out with Jen keeping my wheel safe from behind.

“In the final lap, the speed wasn’t as high as I expected. Coming out of the last corner, the pace picked up a bit.”

In the final lap, Colavita had control of the front looking to set up Kelly Benjamin. Coming out of the final turn, Miller, Benjamin and Schneider sat on the two Colavita riders on the front. Miller came off of their lead-out train and initiated the drag race up the finishing straight.

“I was trying to be as patient as possible,” Schneider said. “I wanted to make sure I didn’t lead anyone out. I held a little back, in reserve, in case anyone tried to come around. I got to the point where I was comfortable going. I wound it up and was like ‘okay go.’ Once I had the gap, I was just looking out of the corner of my eyes to make sure that no one was sneaking up.

“I was so happy to have Mer up there. She got caught up behind a crash around eight to go, so I was bit worried, but she got pushed back in pretty quick, and I was hoping she would be up there for me in the end, and she was, so that was good.”

Miller continued to sprint and took 5th in the bunch and 6th for the race.

“I think the three of us did all we could do, and everyone did good work,” Schneider added. “Getting the win is ideal, but I’m happy. Winning a sprint early in season is good for he confidence. I felt comfortable. I’m happy with how we all rode, and I’m excited for Sea Otter next weekend.

“We talked about how, if we won tonight, we wanted to dedicate the win to Alison (Powers). Even though we didn’t win, I still think it’s pretty cool to dedicate the field sprint to her, so I’m going to say this was for her, from us. We missed Ali out there. She would have be fun to have with us.” 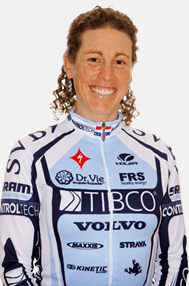 “Our girls are doing great in the USA, Europe and globally as they get full swing into the 2011 season. Each of these riders are strong women and incredible role models for youngsters, women and athletes around the planet.  They juggle family, jobs and pro riding each day – they truly optimize life to its fullest.  We look forward to seeing many of them at our Gatineau cycling event here in Quebec in May 2011. We invite you to join us, and meet this incredible women, whom I am proud to support,” says Dr. Vie from Montreal, Canada