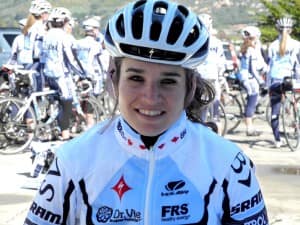 In Sunday’s race, Numainville was part of a seven-rider break that was driven by her teammates Jennifer Wheeler and Kendall Ryan.

“They did a lot of work today to make sure the break succeeded,” Numainville said.

With only one rider from Colavita in the break to Dr. Vie Team TIBCO’s three, Colavita had the impetus to chase, but any move out of the peloton to get up to the break was quickly covered by Meredith Miller and Joanne Kiesanowski.

“Every time one of them tried to get off the front Jo or I was glued to their wheel,” Miller said.

With the numbers up front, Dr. Vie’s Team TIBCO took control on the last lap, with first Ryan and then Wheeler providing the lead-out.

“They both worked really hard on the lead-out,” Numainvillle said. “I was right on Jen’s wheel going into the last corner. We were careful going through the last corner. Jen dropped me off and there was a crash behind so she kept going.”

Wheeler finished up in 3rd place to add to the weekend’s podium total.

In Friday’s win, with conditions wet on the course, the race ended up staying mostly together and as the laps ticked down, it became apparent that the race would end in a bunch sprint.

The Team lined it up on the front. In the long back stretch, Miller took the Team as far as she could and left it up to Kiesanowski to put Numainville in position for the final corner, with Ryan sitting on the Canadian champion’s wheel sweeping.

Numainville was first out of the last turn and stayed there to the line, with Ryan sitting right on her wheel to take 2nd.

Saturday’s race looked to be a repeat of Friday, with another bunch sprint at the end. But with wet conditions, the final corner proved to be very sketchy.

“We had it nailed again,” Miller said. “I knew that whoever came out of the last corner first would be in position for the win, so I knew it would be a race for that last corner. I was going as hard as I could on the back stretch.”

Miller dropped off Numainville heading into the final turn and she was indeed on the front, but then another rider dove the corner much too hard and lost her wheels and slid out. The crash caused a near disaster, with Numainville running over the other rider’s rear wheel, coming to nearly a complete stop and unclipping. By the time she got clipped back in and re-started her sprint, Edita Janeliunaite had gotten past her.

“If I had another 20 meters I think I would’ve caught her,” Numainville said. “It was very disappointing for the team to work so hard and put me into position and then have that work not result in the win. It was a tight corner and I had the line. I’m still not sure where the other rider came from. 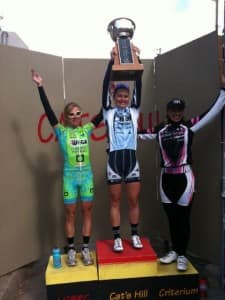 In other news: Los Gatos, CA – Dr. Vie Tibco girl Megan Guarnier, racing practically in her back yard, took a strong win Saturday at the Cat’s Hill Classic in Los Gatos, and then followed that up with 2nd at the Scott’s Valley Grand Prix Sunday.

Guarnier parlayed the form she gained in Europe into a strong performance last weekend at the Joe Martin Stage Race, earning a win, a pair of podiums and 2nd overall at the Arkansas race. She kept rolling this weekend, winning the notoriously hard Cat’s Hill Classic Saturday, with ample help from teammates Emma Mackie and Carlee Taylor.

All three were active throughout the Scott’s Valley race Sunday, alternately attacking or covering moves the entire race. Things came pack together late in the race, and Guarnier took 2nd in the sprint finish to Nicky Wangsgard.

Notes
Junior Skylar Schneider even got into the act in St. Louis this weekend. The 13-year-old took the win in the women’s category 3/4 race before the pro women took to the course. The younger Schneider battled windy, rainy conditions and avoided a number of crashes to sprint to the victory.

Meet our Dr. Vie Tibco girls this week in Gatineau as they race at the Grand Prix Cycliste. Drop by our tents, meet our top riders from USA and Canada and lets have some fun in Canada.