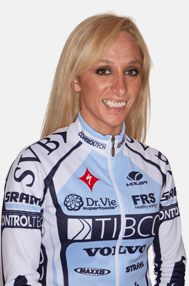 Monterey, CA – Samantha Schneider of Dr. Vie Team TIBCO closed the Sea Otter Classic the way she started it, taking 2nd place in the final-stage circuit race on the Laguna Seca raceway Sunday. She opened the Classic with a 2nd place in the criterium.

Schneider took 2nd in the sprint out of a small front group of about a dozen that stayed together over the 18 laps on the punishing circuit that features a progressively harder climb on the front side of the course, followed by a twisty descent, with an often windy final third to the finish line.

“I am really disappointed that I can’t past second, but I felt really good on the hill,” Schneider said. “I surprised myself. I was enjoying myself. The more it hurt, the more I was like, ‘I can’t wait to go down the corkscrew.’ We got in a good groove where it was fun to keep the gaps closed.

“The first few laps felt pretty easy,” Schneider continued. “It was my first time doing Sea Otter, so it was my first time on this course, feeling out the corkscrew. I picked smart wheels once the gaps started opening, and I had to stay focused and keep a positive mentality up the climb.

Overall race leader Kristin Armstrong was motivated to control the pace up front once she saw her teammate, sprinter Coryn Rivera, making it over the climbs. But Schneider and Meredith Miller had no problem staying in a front group that formed around mid-race.

“Sam was riding so strong, Miller said. “On the very first QOM sprint, a small group got off the front, and Sam actually was there, and I had missed it. Eventually it all came back together. But Sam was always right there. She was in the top five every time it would be hard. It was awesome watching her climb like that. I was confident that when the group came to the finish together, Sam would be there, so I wasn’t going to do anything aggressive like attack. I wanted to be there for her and keep things together.”

“Once it calmed down, I saw Meredith there with me,” Schneider added. “She allowed me to stay in and conserve, and she did the work for Team TIBCO. There was a select group of girls working and other girls sitting on, so I sat on. Once the group was established, it wasn’t too difficult to stay there. I hooked up with Meredith in the sprint. Unfortunately there was a crash that happened, and the lead-out kind of paused for a second before we started rolling again. I swung out wide when the crash happened, and if we had just stayed on the gas, it would have been a completely different story.”

The crash took out Rivera, but Jade Wilcoxson made it through and was able to take the win.

“The girls rode a smart race,” said Team Directeur Sportif Lisa Hunt. “We conserved early on. Peanut Butter was trying to wear Sam down. They were attacking and not expecting her to make. Sam had to bridge. She had to cover things. She was working really hard. It was a tough sprint because there was a bobble there, and Sam had to take on extra wind. She had to jump again.
I wish we could have had the win. Sam is riding incredibly strong. This is huge for her going into Speedweek. She’s going to have an amazing week there.”