By Gillian Dr. Vie athlete: Local Ride/Dr. Vie Superfoods+ teammate, Jasmin Glaesser, and I travelled halfway around the world to the first UCI Track World Cup in Astana, Kazakhstan as members of the Canadian National Track Team. The Canadian squad for this competition was comprised mainly of development riders, and although Jasmin was coming off a very successful Pan American Games as a member of the gold-medal winning Women’s Team Pursuit, neither of us had ever attended a World Cup race before, and were both eager to get out on the track and show the world what we could do. 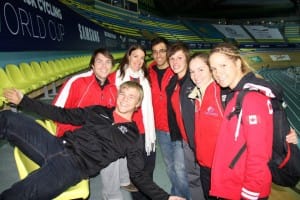 Unfortunately, actually getting on the track in the first few days would prove more difficult than we had anticipated, as none of the Canadian team bikes made it to Astana until the Wednesday prior to competition. Monday was spent riding rollers in the hotel basement on US Sprint Coach Jamie Staff’s road bike (turns out one size does fit all!), then on Tuesday the entire team was outfitted with some rental bikes, courtesy of the velodrome.

By Wednesday, we were very well-rested and raring to go, so upon getting the excited phone call that our bikes had finally arrived, the entire team piled into the first shuttle bus to the track. Our mechanic, Sandy, and team manager, Jonny, had the bikes built and ready to ride in record time, so without further ado, we all hopped up on the track for some warm up efforts.

Thursday was race day – the Women’s Team Pursuit qualifiers were first up, and the Canadian team of myself, Jasmin, and Julia Bradley was the last team to start. With very minimal time spent practicing together, and only one training session on the track prior to the race, we rode a good race and more importantly, gained valuable experience for our next international competition. 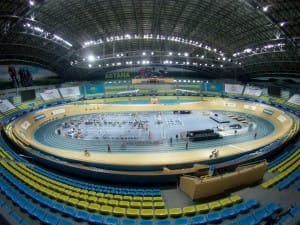 The next evening, after watching the opening ceremonies from the Team Canada pen, I was up on the track again for the Points Race final. This was my first big mass-start race, and I was very motivated to ride hard and get a good result for the team. After winning the first sprint, taking 3 points in another, and then gaining a lap with a small group, I was well-placed for a podium position. Unfortunately, with 8 laps to go I was caught up in a crash and didn’t score points in the final sprint, finishing the race 4th overall with 28 points. I was disappointed initially, especially after sitting in second place for most of the race, but I’m very happy to have finished in the top five at my first World Cup.

Over the next two days, Jasmin won the Scratch Race and placed 4th in the Points Race on her way to finishing an amazing 7th place overall in the Omnium, capping off a successful campaign by the Canadian Team at the first World Cup of the 2011-2012 season. Huge thanks to our mechanic Sandy Gilchrist, team manager Jonny Evans, videographer Steve Sleep, and coach Richard Wooles for taking care of every last detail and allowing us to think about nothing but racing and making the most of this incredible learning experience!

Mother Vie and I congratulate our Dr. Vie Superfoods Local Ride womens track team from BC on their great performance in Astana Kazakhstan. We here in Montreal are experiencing trying times fighting lack of heat at our factory and attempted assault from our landlords repair men. Amidst all of our hard times here we wish our team the very best.

With love and well wishes