Life in bike racing isn’t always easy for a young girl. Most categories are too fast (still good challenges), and some are too slow. This year I have finally foung my place as a 13 year old girl in the women’s category 4.
This year started out with a couple of spring series races that were a good way too start off. My first race I got dropped in the first lap of the C race. What can get better than that?
My first big race was Barry’s Roubaix, where I crashed the first lap but still finished the race. Then comes the good stuff: Race the Ridge 2012- my first race as a category 4 women! 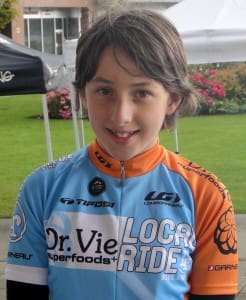 The road race was a tough race! Right off the bat, on the first hill the attacks started! I got dropped, but not as bad as some people. Since the adrenalin was still running strong, I tried to chase the group down but ended up in a group of 3 girls. Of course they were both older than me, so that got me even more motivated to beat them.
We worked as a group for a good three laps. One of the girls liked to attack on the down hills, but I chased her down quite quickly. Then came the last lap of torture!
The hills felt double as long, and that lap felt like it would never end. The pace picked up and then came the uphill finish.
If I learned one lesson from that race it was not to sprint to early! Oops! They did beat me and I came 10th in that stage.
The time trial was so much fun! I closed almost a two minute gap on the people in front of me, but got passed by some of the others. I got 12th in that race. This was the first year that I got to do the full 22km course.
If I can tell you one thing, it is that the training on the velodrome that I have been doing has definately helped with the cornering in the criterium. Sandra told me that if I can stay in the pack for the first 5 laps, then the intensity subsides a bit. And, stayed with the pack I did- for half the race. Some people got dropped, but it wasn’t until the prime that they lost me. After that I rode with the world champion paraolympian- Denise Schindler! She beat me in the sprint, but I still got 10th place, and 9th place overall!
My teammates have been super helpful and full of great information and advice for me.
Next is the MUTUAL OF ENUMCLAW Stage Race.  I am racing cat. 4 women and am going kick butt! I will be training this week mainly on my time trial. It is only 10 km, but that could make or break my position in the race.
Thank you for all the support this year Dr. Vie,
Maggie Coles-Lyster
We wish Maggie all the best and send her tons of love and hugs.
With love
Always,
Dr. Vie, Scientist & Founder
Dr. Vie, Inc.