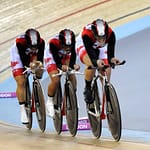 Dr. Vie’s elite female athletes with the Canadian Track Cycling Team will hit the boards one more time before the 2012 Olympic Games as the team makes the long trip down under to compete at the 2012 UCI Track World Championships in Melbourne, Australia, from April 4th to 8th.  Laura Brown,  Gillian Carleton and youngest Jasmin Glaesser are on Dr. Vie Superfoods womens cycling team based out of BC and will represent Canada at the world championships in Australia.

The small but powerful team will be hoping to post strong results at this event, sending a strong message that they will be ready to compete for Olympic medals this summer.

Although the 2012 Olympic Test event was the pinnacle event for the Canadian Team in its preparations for the Olympic Games, the World Championships in Melbourne will be another opportunity to gain experience and fine-tune the operations for London 2012.

“The 2012 London Olympic Test event was the big one for us this year. Our key is now is small daily improvements as I am sure they will give us staggering long-term results when we get to London in August. Melbourne will be another test but not the main focus,” said Richard Wooles, head coach of the Canadian Track Cycling Team.

Tara Whitten of Edmonton, AB will be defending her title in the Women’s omnium, a race she won for the last two years at the World Championships. Whitten will certainly be the rider to watch among the group of riders in the omnium as she will sport one more time her famous rainbow jersey this year.

The women’s team pursuit, a team that has shown a lot of depth and power this season by grabbing the silver medal at the 2012 London Prepares Olympic Test event earlier in February. This time around, Tara Whitten, Laura Brown of Vancouver, BC, Jasmin Glaesser of Coquitlam, BC and Gillian Carleton of Victoria, BC will be sporting the Maple leaf and add another team pursuit race to their career resumes. The final team selection will be named shortly prior to the event.

Glaesser will also race the women’s Points race, while Whitten will race the individual pursuit in addition to her busy schedule.

Finally, Monique Sullivan of Calgary, AB, who is coming off an exceptional Pan-American Championships with a gold medal in both the women’s sprint and keirin, will be hoping one more time to improve her ranking and gain valuable race experience that will come in handy at the Olympic Games. Sullivan will take part in the sprint and keirin events at these UCI World Championships.

“We are honoured to support our Canadian women as they represent Canada in Melbourne in April en route to the London Olympics in August this year.  These women are highly focused emotionally and prime their bodies for peak performance. Watch my interviews with these women to learn more about them and how they do it.  Laura Brown, Gillian Carleton and our youngest on the team Jasmin Glaesser have our blessings, ” says Dr. Vie sponsor of these women on Local Ride Dr. Vie Superfoods Canadian cycling team based out of Vancouver, BC.