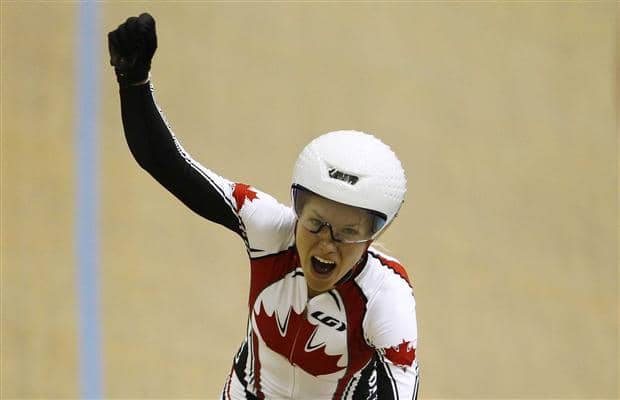 Dr. Vie’s three Canadian women from Dr. Vie Superfoods Local Ride BC womens team won Gold today at the Pan American Games in Guadalajara, Mexico (photograph by Jose Miguel Gomez, REUTERS Times Colonist.com). What a day! What a moment for this youngster barely 18 years old, Jasmin Glaesser (Dr. Vie TV with the girls) Laura Brown, Steph Roorda and Jasmine will compete at the 2012 London Olympics as they represent the best of Canada. 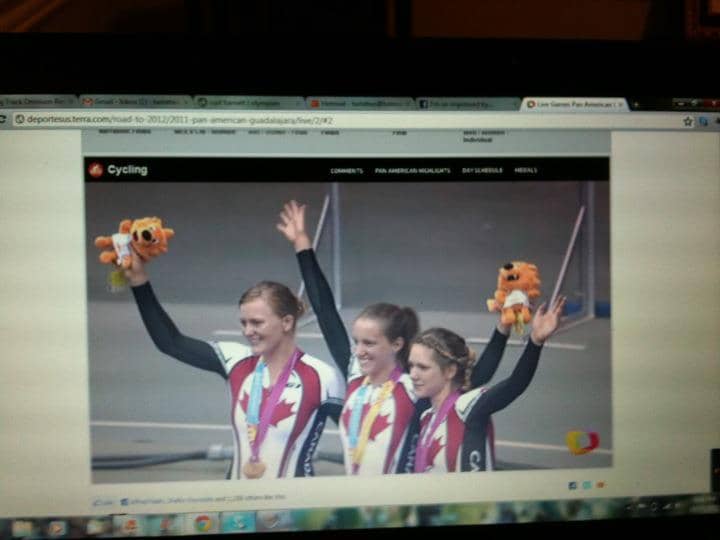 Laura Brown won the Bronze medal at the individual Time Trials at the Pan Am games yesterday. As of today Canada has 9 medals under its belt! Two medals thanks to our Dr. Vie Superfoods Local Ride women from BC, Canada.

The Canadian Cyclist reports: The team qualified for the gold medal race with a time of 3:25.093 in the morning session, and in doing so broke the previous Canadian record, which was set at 3:25.416 at the 2010 UCI World Cup in Melbourne, Australia by Brown, Roorda and Tara Whitten (Edmonton, AB).

In the Gold medal dual against Cuba, Roorda, Brown and Glaesser rode to an amazing time of 3:21.488 to set a new Pan-American mark, and significantly improve on their morning’s qualifying performance.

“It’s cheesy, but there is a quote that says ‘Happiness is only achieved when success is shared’. To win a gold medal with my teammates Steph and Jasmin has been amazing. It’s certainly a very special medal,” said Brown, who also took the bronze medal in the women’s road time trials on Sunday.

“It’s amazing! We were just trying to beat the other team. When I turned around and I saw 3:21,4, I felt that it was almost better than winning the gold medal, because that is a fantastic result for this team. We had never raced together before today, just trained together,” said Stephanie Roorda, who will be racing the women’s omnium for Canada over the next two days.

Today’s racing also marked the first international appearance on the track by Jasmin Glaesser while wearing the Canadian uniform. The young cyclist held a German licence until a few weeks ago (check out my interview with her in the video above) when she officially received her Canadian citizenship before making the trip to Mexico.

“I couldn’t have asked for a better day. It was absolutely amazing. All three of us committed 100% to the ride, to doing our best. I couldn’t believe seeing that 3:21 up there afterwards. It’s just amazing,” said Glaesser. “I’m so glad that I can race for Canada. I’ve been working really hard for this, and really glad to be here. I’ve been enjoying the experience. I am so excited about the next year, us going as a team, getting more experience.”

Tanya Dubnicoff, coach of the Canadian Track Cycling Team in Guadalajara, was thrilled with the brilliant performance of this newly formed team. “What an amazing day. I knew after seeing the qualifying times that we were the team with more to gain going
into the finals. That being said, you can’t count anyone out. We knew the Cubans would come out fast, and we had to stick to our plan, to keep to our schedule and we did. I didn’t even look at the board, at the Cubans. I have never seen a better ride from Team Canada in the Women’s Team Pursuit. It was beautiful.”

Mother Vie & I are so humbled to support them this year. It takes a lot out of us personally as a small company to support our women but we do it out of pure love.  Happiness is best shared….as Steph so aptly says. These are the women on our home page screen.

We love you Laura, Steph, Jasmin and send you hugs and love.