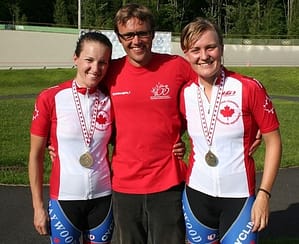 In the women’s race, it’s without any surprises that World Champion Tara Whitten of Edmonton, AB came on top, winning all six races to score the lowest possible points in the gruelling event. Tara is Dr. Vie’s athlete and rides on Dr. Vie Team Tibco USA. 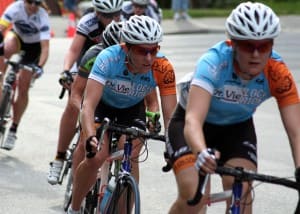 I am pretty happy to win. But I am also pretty happy with my training. It shows I am at a pretty good level right now. I am excited about the season to come. It’s less than a year to the Olympic Games now, so the main objective will be to prepare for the Olympic games. I am in  an excellent spot for qualifications, so I don’t have to worry quite as much with regards to the World Cups,” said Tara Whitten.

“The focus has been on some road racing and building endurance. I had a good training base this summer, but at the same time I believe in never getting to far away from the top speed. I have been trying to be on the track every ten days or so and maintain the sharpness,”  continued Whitten. “I am really hoping that at some point when I retiring I can do some things to improve the participation level and depth of track cycling in Canada, and especially on the women’s side.”

Laura Brown of Vancouver , BC took the second place of the omnium in a tight race with teammate Stephanie Roorda. Both Laura and Steph are Dr. Vie athletes and ride on Dr. Vie Superfoods BC team.

In her first race as in the Elite category, Jasmine Glaesser, who raced with a German licence but will receive her Canadian citizenship in the weeks to come, impressed many, almost beating Tara Whitten in the scratch race. The young Canadian cycling protégé, hailing from British Columbia, has a bright future in front of her. The young 19 year old racer flew in on the Tuesday night red-eye from Vancouver to race at the Canadian Championships on Wednesday, as she wrote her citizenship exam Tuesday.  Jasmine Glaesser is Dr. Vie’s athlete and rides on Dr. Vie Superfoods BC team.

” I am so happy for our girls from both teams. It is a historic time for the women who ride on 2 of my teams. So this year they have been actually competing against each other and against teams.  The best part is that two of the girls Laura and Steph from my Dr. Vie Superfoods BC team will ride with Tara Whitten from my Dr. Vie Team Tibco as they join foices to represent Canada at the 2012 Olympics in London next year.  These three women are the Canadian Team Pursuit. ” says Dr. Vie sponsor, following and supporter of these women.

Our Dr. Vie women were amazing these last few days in Bromont. Amidst rain, stopping of the race, drying the track, wind and the power of nature, Tara Whitten, Laura Brown, Steph Roorda are training for 2012 London Olympics in 11 months. Follow these women as they train and gear up for the ride of they lifetime.

Watch my special introduction (3 parts) of our beloved women live from Bromont during the National Championships this week. Click here now. http://drvie.com/dr-vie-tv/