Tweet and Share0
Share0
Share0
Pin0
Share0
Tweet0
Share0
Dr. Vie’s young Canadian track cyclist is back from London with a silver medal en route to the London Olympics this year.  She reports on her experience:
“I am happy to report that after two rounds of record breaking team pursuits, Canada’s women’s team pursuit team has  taken a big step forward on the road towards winning an Olympic medal this summer, by placing second at last week’s UCI World Cup/Olympic Test Event, held at the Olympic velodrome in London, England. 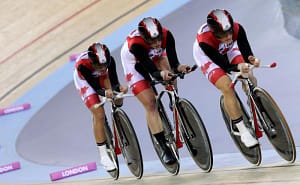 We started the competition off in style by posting the fastest time, and a new Canadian record, of 3:20.785, during qualifying, setting ourselves up for a gold medal showdown against the British hometown team.  Despite an overall good time, we knew that our execution hadn’t been as good as it could have, and we were determined to step up our game for the final the next night.
There is nothing quite like walking up to the line to compete against the reigning world champions, who are cheered on by a sold-out crowd of several thousands.  But as athletes we know how to focus on the task at hand and to blot out any distraction that could detract from our performance- in this case that meant shutting out the boisterous stadium!  I was incredibly proud of my teammates as we gave it our all that night, beating the previous world record and shaving two more seconds off of the Canadian one, for a time of 3:18.982.  It was unfortunately not quite enough to hold off the British contingent, and so we had to settle for silver. 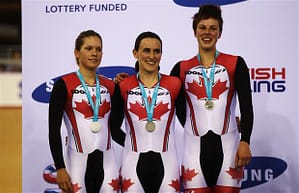 While it is always disappointing not to win, I am tremendously excited to be in a position where to be the fastest is now just tenths of a second away, and I believe we have the potential to smoothen our riding and go even faster in the weeks and months to come.  Without a doubt the road ahead will be tough and we will have to work harder than ever before, but we are ready for the challenge!
From the whole team a big thank you to our supporters- we couldn’t do it without you!
-Jasmin”
We look forward to an in depth interview with Jasmine on her fantastic races in London last week. This lovely young woman is now preparing for the London Olympics in August 2012 together with our three Canadian athletes from Dr. Vie Superfoods cycling team out of BC Steph Roorda, Laura Brown and Gillian Carleton.
Love and hugs
Always
Dr. Vie, Scientist & Founder
Dr. Vie, Inc.
http://www.DrVie.com