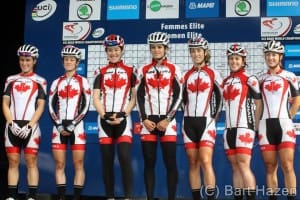 Kobenhavn, Danmark, Dr. Vie’s former home city was the center of attention this week. Dr. Vie’s elite Canadian cyclist Joëlle Numainville of Montreal, Quebec rode to the 12th position in the Women’s road race at the 2011 UCI Road World Championships in Copenhagen, Denmark on Saturday, which as anticipated ended in a bunch sprint to the finish line. Congrats to Joelle. Italy’s Giorgia Bronzini took the title again two years in a row. Watch Dr. Vie’s interview with Giorgia after her “typical Giorgia style” sprint win in 2011. “Giorgia is an incredible rider and an amazing young woman, congrats Giorgia,   Watch interviews of Joelle and Erinne on our Facebook”, says Dr. Vie. 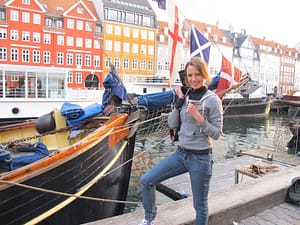 The first eight of the 10 laps of the race were uneventful, with the 146-rider peloton staying practically together with no serious attacks being undertaken. It’s only at the 112km mark throughout the 140-km race that Canadian rider Clara Hughes of Glen Sutton, QC launched a solo attack that went unanswered by the peloton. After riding solo for almost the full two remaining laps, showing a maximum gap at 46 seconds, Hughes was quickly overtaken by a fresh and powerful peloton to set-up the sprint finish. Clara finished 103.

The sprint finish was expected in this race, since the first three road races ended with the peloton sprinting across the finish line. Ultimately, Giorgia Bronzini of Italy won the race, followed by Mariane Vos of the Netherlands in second and Ina Tutenberg of Germany in third.

« I am a bit disappointed with the Sprint. I was in the wrong corridor, and had to fight the traffic a little bit by myself. Combining all the elements, it wasn’t a real success and wasn’t well positioned. I did everything I could, I gave everything I had in me. I can’t ask myself for more than that,” said Numainville after the race.

“I was really happy to see Clara in the front, on the attack. I even believed at some point that the break may stick and that she would win the gold, that nobody would catch her. The other nations were well prepared and planned their sprint, and caught her late in the race. What Clara did was the right move to do, at that point in the race.”

For Hughes, this attack was probably the only way to come away with the victory. Her move shook things up, initiated counter-attacks, created some reactions which ultimately made for an exciting end of race. “I wanted to go on the attack in the last three laps, possibly the last two laps. The moment was there, and I put on a good gap, put my head down and tried to do what I could. I wanted to help Joelle, but I got caught behind the crash. A minute I was leading by 45 seconds, the other I was on the ground. That’s bike racing!” commented Hughes after the races.

“Giorgia’s win was expected, as she is an incredible cyclist, highly tactical in her moves and is known for her “spring to gold” finishes. I applaud her as she is also an amazing young woman with a great heart, ” says Dr. Vie who spent quality time with Giorgia before and after her “sprint to gold” win in Canada earlier this year. Watch the Dr. Vie TV interview of this amazing Italian woman.

“We also congratulate our own Tara Whitten who came 4th in the time trials during the World Championships. Congrats Tara. She is another amazing young woman with a heart of gold,” says Dr. Vie. Watch Dr. Vie TV interviews with Tara.

Watch Dr. Vie’s interview with Giorgia Bronzini, Jolle Numainville, Erinne Willock and Clara Hughes at the end of this video.