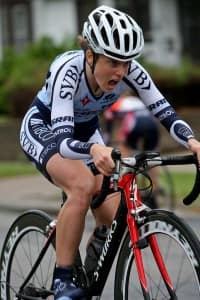 USA The Nature Valley Grand Prix experienced a major shake-up in the overall standings by the end of Stage 5 today, and Dr. Vie’s Team TIBCO Canadian rider Erinne Willock was a big part of it.

“The Team was aggressive and on top of everything all day,” said Team Directeur Sportif/manager Lisa Hunt. The end result was putting three riders in the decisive eight-rider break that determined the stage win, and the top of the overall standings. Erinne Willock took 3rd on the stage and jumped up from 8th to 2nd overall behind Amber Neben (HTC), who finished 2nd on the stage. Samantha Schneider and Megan Guarnier were both in the front group with Willock, who also earned Most Aggressive Rider for her efforts today.

The overall standings were ripe for a shake-up a day after a third of the peloton – including race leader Kristin Armstrong – got caught up in a last-lap crash in the Uptown Minneapolis Criterium. Today’s hilly, 76-mile course in rural Wisconsin did its part to break up the race.

The first separation occurred on the first QoM, just 13 miles into the stage, with Guarnier off the front in a small move. A reshuffling after that move came back led to the beginnings of the decisive move, when Guarnier and Schneider joined a small group off the front that worked cohesively enough to open a two-minute gap on the main bunch. The gap came down on the second QoM at about the 32-mile mark after cohesion in the break broke down.

However, the move re-animated when Neben jumped out of the main pack on the second QoM and bridged up. On the third QoM at mile 40, Willock made her move and bridged up to a small group that was chasing Neben and Leah Kirchman (Colavita), who had opened a gap on the third climb of the day. They stayed off for nearly 3 miles before the two groups integrated and the winning move had solidified.

When the front group reached the finishing circuits, the gap was at 0:35. But by the time they hit the line for the final circuit, the gap was out to over a minute on the peloton, which was being led by the Peanut Butter & Company team of race leader Armstrong.

“On the last lap, basically Ally (Stacher, HTC), Amber, Erinne and I kept rotating,” Schneider said. “I took the last pull for a couple straight-aways, keeping it as fast as I could. Once I was done, Erinne attacked shortly before the last corner before the line. She got passed in the sprint but held onto third. We weren’t concerned with place, really. We just wanted to increase the gap as much as possible on that last lap.”

That gap ended up at 1:13 to the main bunch, more than enough to make a change at the top of the standings.

“It really was a great ride by everyone today,” said Team Captain Meredith Miller. “The fact that we had three in the break was really awesome. Megan and Sam buried themselves to keep the break away for Erinne.”

Kirchmann got the win and a 0:12 time bonus, while Neben and Willock got 0:08 and 0:06 respectively. Heading into tomorrow’s final stage, Willock sits 0:21 behind Neben, while Kirchmann jumped to 3rd overall at 0:38. Armstrong dropped to 4th overall at 0:52.

“We looked like the strongest team because we had two of the seven in the initial move and then we had three,” Joanne Kiesanowski added. “It was awesome that we really got it together today. We have our work cut out for us tomorrow as well.”

Tomorrow is a mere 45 km, but it includes numerous trips up super-steep Chilkoot Hill.