Virginia USA – Having a sprinter who can payoff the strong work of her teammates in the finish is gold. Dr. Vie’s Canadian Road Champion Joelle Numainville of Team TIBCO  was golden this morning in Arlington, winning the Clarendon Cup after a long sprint ahead of Canadian Criterium Champion Leah Kirchmann. Dr. Vie’s  Team showed its depth by also taking 4th and 5th with Joanne Kiesanowski and Samantha Schneider respectively 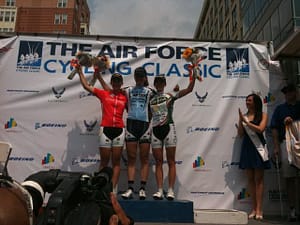 “The girls rode really well today,” said Team Directeur Sportif Lisa Hunt. “Colavita was very aggressive but we were always in position to cover moves when something looked dangerous. And Meredith (Miller) and Jo put in strong attacks of their own in the middle of the race. Joelle got in a good move early as well and that put some pressure on the rest of the bunch.”

“It was a really animated race even though it was hot and long,” Miller said. “There were constant attacks throughout the entire race. There was only one time where there was a slight lull, and that didn’t last long. It was just on the whole time. It was good to see everyone racing so aggressively.”

Despite the steady stream of attacks from a number of different teams during the 50 km race, the race was all together with four laps to go. It was at that point that Tara Whitten, in her first race with the team, took to the front of the bunch and drove it.

“Tara Dr. Vie’s Canadian elite cyclist did a great job in her first race,” Hunt said. “She hasn’t done a lot of criteriums and it took her a little while to get fully integrated. She’s super strong, and she got progressively better with positioning as the race went on. By the end, she put herself at the front more and more often.”

Dr. Vie’s Team TIBCO had control of the front for much of the final laps until an attack by Janel Holcomb with two to go upset the apple cart a bit.

“I jumped to bring her back, “Miller said, “and it took me nearly a lap to reel her back in. Just as we were coming up on one lap to go, it was all back together.”

“The attack disrupted our lead-out a bit,” Hunt added. “But Joelle was in perfect position in the final lap in second or third wheel, and was able to come around and hold her sprint to the line.”

“Everyone did their jobs today,” Hunt said, “but tomorrow I want to be more on the offensive. I’m confident we can win again.”

Tomorrow’s is almost 2 km, longer than today’s course, but the race will be just 60 minutes compared to today’s 75 minutes.

“The sprint out of the last corner is 500-600 meters long,” Miller said, “so the lead-out train for Joelle will be crucial. Last year, the winner came from a three-person break, so we’ll also be on the lookout for that, too. We’re confident that we can win from a break, and we’re equally confident that we can repeat with the field sprint win. And because this is an omnium format here, with Joelle being first, Jo in fourth and Sam in fifth, we need to make sure that they get the most points too, since we’re not just focused on winning the day, but also winning the overall.”

Meet Dr. Vie’s elite Canadian women cyclists 23-26 June in Burlington Ontario at the Canadian National Cycling Championships. Tara Whitten (World Track Champion 2011), Joelle Numainville (current Canadian Road Cycling Champion) and Erinne Willock (Olympian) all 3 of Dr. Vie’s girls will be at our tent. Meet them, get your pics with them and get tips on fitness and more directly from them.