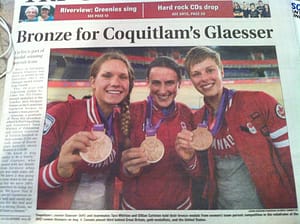 Short race, riding at high speeds, no brakes, Dr. Vie’s women rode their way to a BRONZE medal, making history at the first every Olympic women’s team pursuit event. There was a roar from the crowd at Canada House in Trafalgar Square, London. All I could do was cry into the shoulder of BC Minister Ian Waddell who stood by my side watching the entire race. What an event it was. Our girls did it, they bring home a medal! 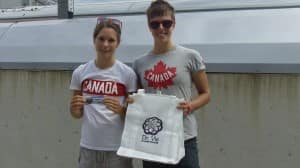 In 2009, I launched Dr. Vie Sports low allergenic foods and I was approached by a cyclist on my distributors team in Vancouver.  He wanted his team to have access to our foods.  So I started feeding Dr. Vie Sports foods to Total cycling team in Vancouver. The team was made primarily of men cyclists with a handful of women. Two of the women were on Team Canada, Laura Brown and Alison Testeroete (national champion).

The next year the team could not support the women. I was approached by Richard Wooles the national cycling coach – he and a local bike store in Maple Ridge wanted to form a womens cycling team to support the riders who were let go. They needed money.

Mother and I were already in a tight spot with our life savings invested into our Company. Never the less, we decided to fund the team and personally take major cuts in our lifestyle, for me it meant a major cut in my food intake and living expenses. But I was determined to help the girls. For Mother, it meant rationing her food also when she came over to stay with me each year. It was quite a shock to her but she was amazing and acclimatized after a few weeks. My Mother is truly and Angel.

To date, I have traveled to various locations in Canada to be present at the races as my girls competed. This meant that I had to close my factory and stop production. Taking up half of my time. I lugged food for them in my beaten up car and stood in the pouring rain, or sweltering heat watching them and cheering for them as they raced on the road and on the track. Driving home tired and unpacking goods into the factory before our production started was an ordeal!

This year, Gillian Carleton joined the team, and Jasmin Glaesser opted to venture to the USA. I really felt for this amazing youngster who was all alone in her passion to cycle. So I  took her under my wing as well as the 8 women team in Vancouver, supporting her financially each month. Tara Whitten continued with Team Tibco USA – that I sponsored in 2011. Tara loved our foods at each event.

It was only late last year that we learned of the Olympic selection with 5 of the women from my Dr. Vie team (Laura Brown, Steph Roorda, Gillian Carleton and Jasmin Glaesser and Tara Whitten) which was finalized in June 2012. Laura Brown, one of my first cyclists on the team was to be the fourth rider – backup. I was very excited. I was also very sad for Steph Roorda who was devastated by not making the team. None the less Steph rode to victory in the BC Superweek road race taking the podium and featuring on TV.

As the time came close, I decided to drive 5000 km across Canada (mid July 2012) one of my aims was to educate Canadians across the country about our team and to motivate them to cheer for our women – so they did, from Saute St. Marie, Thunder Bay, Winnipeg, Chaplin, Regina, Medicine Hat, Merritt, Kamloops,  Banff and Vancouver across 5000 km Canadians of all cultures were cheering our women on.

My second aim was to create an awareness for health and to stimulate an interest in Dr. Vie Kids Camp in cities across Canada. Once again I was invited by folks from the 8 cities to host a camp with their involvement.

Just as I arrived in Vancouver I arranged to leave for London, luckily acquiring a ticket and accommodation at the last minute. There was no time to waste. Of course, there were no tickets to the events. I was determined to watch my girls race. My roving reporter, Janet from Ontario informed me about Canada House (Consulate) in Trafalgar Square in London. I watched the qualifiers among strangers in the gigantic Victoria Park in London and the finals in Canada House.

The qualifiers on 3 August was disappointing for us all, as the girls were experiencing quite a challenge. They ranked 4th and as we headed into Saturday we were meditating hard.  In Canada House, I explained to many spectators the strategy of the race, so when the first heat began, as the crowd moaned ‘oohhhhh’ we knew that our girls were having a tough time. We watched their worried faces as the tried to rest enough before their final heat. We saw our youngest rider, Jasmin (19 years old) close her eyes and lean back in her chair in a state of meditation.

As they perched their strong bodies onto the brakeless bikes, held steady by their coaches, my hands shook as I filmed the scene. On my right stood Ian Waddell the previous Minister of Tourism and leader for the Vancouver 2010 Olympics. He was excited as could be. Read the article that Minister Waddell wrote about us by clicking here.

As our women finished the first lap, the “oohhh’s ” were dominant in Canada House, and we held our breath as the Australians were ahead of our girls by a few seconds. This scene repeated itself in the 2nd lap…and we spurred the girls on with our positive energies…into a miracle in the final round, where our girls beat the Aussies, in a remarkable last sprint. Canada House rocked with happiness and shrieks of joy.

When I interviewed the girls in Stratford (Olympic Park) on Monday afternoon, I asked Jasmin what resulted in their win? She said: ” Dr. Vie foods!” and she whipped out one of the Dr. Vie Sports Go that I had shipped to her in Los Angeles last month. Jasmin is vegetarian and is very careful about what she eats. She is also a yoga student and featured in my Dr. Vie Academy yoga poses and has benefited from the Academy as well. She is an amazing role model for youngsters around our planet.

Each of my athletes whom I support with money and food are incredible role models, from soccerites, martial arts fighter, long-boarder, runners and more.

Stay tuned for our children’s camp across Canada where my  athletes and new found friends during my 5000 km journey will participate in Dr. Vie Kids Camp.

We love you women and are honoured to be sharing your lives in this momentous time.

I am so glad that took them under my wing even tho’ my wings were maxed out at that time. Now we can all spread out wings and help children around our planet to achieve their dreams.