Stillwater, MN, USA – Dr. Vie’s Canadian elite cyclist Erinne Willock with Team TIBCO USA rode an intelligent race and easily held onto her 2nd overall position behind Amber Neben (HTC), making the small front group and finishing 4th on the stage.  The final stage of the Nature Valley Grand Prix was its usual slug-fest, but in the end, the top of the overall standings – at least the top two spots – were unchanged with Erinne taking 2nd position. “The effort yesterday took a little out of me, for sure,” Willock said. “We went pretty hard yesterday, especially in the circuits. Amber and I definitely picked it up in the last 20K. It was a good effort that might have taken a little bit out of my legs.” Erinne a petite adorable young woman will be one of 8 of Dr. Vie’s Canadian elite women cyclists competing at the Canadian Cycling Championships in Burlington this week 23-26 June 2011. 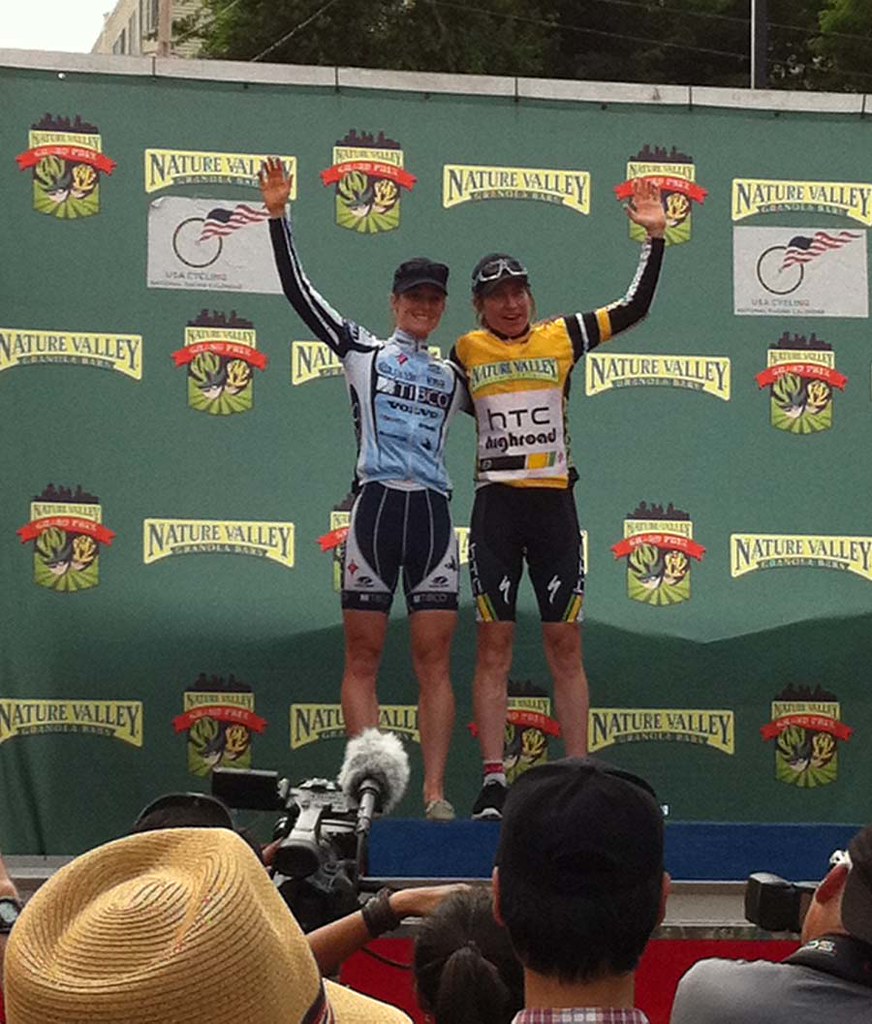 While Willock was focused on having a go at the top step of the podium, she and the rest of the Team also had to keep an eye on the riders in the next few places on GC behind her, especially four-time NVGP winner Kristin Armstrong (Peanut Butter & Co.), and Neben’s teammate, Evelyn Stevens.

“We thought about trying to attack today but it was a bit risky,” Willock said.” Evie got to sit in a little yesterday, and I worried that she would counter any move we would make. She was close enough on the overall that we couldn’t afford to allow her go away.”

Instead, Willock and Joelle Numainville rode a tactical race, and the brutal course, which included 13 trips up Chilkoot Hill, took care of the selection. By mid-race, the front group was down to 12 riders, including Willock and Numainville, with HTC well-represented and keep affairs under control.

“HTC was setting a hard tempo early,” said Team Directeur Sportif/Manager Lisa Hunt. “We expected that would happen. It whittled the group down to about 12 riders within the first third of the race. Carmen (Small) and Sam (Schneider) were in the lead group when it was 20 or so, but on lap four, it started to string out and it split.

By the final lap, the front group had fractured further, with just eight riders at the front end of the race. Armstrong mustered on dig in a bid to move up but her move was quickly shut down. With the finish line at the top of Chilkoot, it was a slow-motion drag race to the top for the stage honors. World Champion Giorgia Bronzini (Colavita) claimed the win – her third of the NVGP – with Stevens and Armstrong finishing just ahead of Willock. Armstrong jumped up to 3rd overall for her efforts.

“It was a great day,” Hunt said. “We had the two riders we wanted to have in the lead group. Joelle maybe did a little bit too much work early on. If she had been a little bit more conservative, I think maybe she could have won the stage, but she was tired, too. But the team is riding so well together. It’s great to see.”

“Our girls are doing so well and having a great time this season. Meet the Canadian team Erinne Willock, Tara Whitten and Joelle Numainville our precious women in Burlington Ontario this weekend as they race for the Canadian Cycling Championships. Drop by our tent, meet our girls and share their lives,” says Dr. Vie.