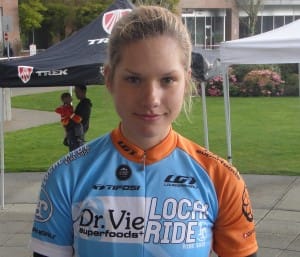 Dr. Vie’s Local Ride Jasmin reports live  from Netherlands racing this month. “With a month of Euro-style bike racing under our belts, it was almost time to go home, but not before taking on the biggest challenge yet – the three-day Raboster stage race in Middelburg, the Netherlands. To say we were filled with misgivings would be an understatement. With a pack of over 180 women, and a coast-side location famous for its wind (even among the Dutch), we were due for some quality gutter time.

Stage one was a 5.7km prologue through the heart of Middelburg, not overly technical but with some gusting winds that promised to keep us on our toes and make for a hard start to the racing. Sadly, none of us Canadian riders here were in possession of any real aero equipment or wheels, which was quite a setback, especially in these conditions.

Nothing for it but to give it our all, and so we used it as an opportunity to get back into time trialing mode, which we will appreciate dearly in a week’s time at nationals. Though it was unforgiving and definitely a tier above a walk in the park, we thoroughly enjoyed the challenge and the chance to race against the clock again. The result was, as to be expected, nothing too overwhelmingly impressive, but in the grand scheme of things, also somewhat irrelevant where the overall classification was concerned.

Epic is the most accurate description of stage two; fast off the start, the race never seemed to slow, and despite sometimes strong winds, we rolled over the line having completed the 110km course with a 42km/hr average speed. Knowing it would be cutthroat, we bared our teeth, rolled up our sleeves, and fought for every inch in the pack. While still not what would be considered particularly great positioning, our effort did pay off when after one of many crashes the field split, and one of us Canadians – as well as two of our fellow Horizon Fitness riders – were in the front group.

Jenny [Lehmann] and the other Horizon rider formed part of the main chase to also complete the stage, while Jessica [Hannah] was the unfortunate victim of a flat tire that ended her aspirations for the day. With just five kilometers left, things were looking up as three of us were still in the lead group, when disaster struck and a huge pile-up barred the road. At least twenty riders went down, and as the crash took place at the front, meaning most of the pack was caught up behind it. Being rather ill-positioned in the group and near the back, we nevertheless had enough time to react to the situation and detour cyclocross-style through a ditch to make it safety around the fallen riders.

Unfortunately, at this point the riders who had not been stopped, seized the moment to launch an attack and we were stuck chasing for the remainder of the race. All in all, it was still a relatively successful day, as five out of the six of us finished and three of us did so within seconds of the leaders.

Day three was the epitome of bike racing in Holland, and as such, a masochistic but fitting conclusion to our European experience. Whilst the main group averaged over forty km/hr yesterday, they took almost four hours to complete 130km today, which if you do the math, equates to a whopping reduction in speed of over six km/hr. Far from being indicative of a lazy peloton, it can be directly associated with the gale force calibre winds that decimated the group from the very start. Eager to give ourselves the best possible opportunity to do well, we managed a spot at the very front at the start, but unfortunately were pushed aside ruthlessly by some of the bigger and “badder” girls.

Over a long-winded cobble section, the group shattered, and when it emerged again, it had reshuffled into handfuls of groups, all gunning it to close their respective gaps to the front. We were spread out for the most part between the second, third, and fourth packs, but Jenny suffered a crash and was forced to withdraw from the race. I was in the third of these groups, and with the second and largest mere seconds ahead, pedals were churning and wheels were whisking away in a lung-bursting effort to get back on.

We came so agonizingly close – just a hundred meters separating us from the promise of being safely tucked in with the front pack, but with the wind blowing unforgivably, that small gap simply would not close and eventually grew to leave us behind. Words cannot describe the wind that engulfed my group over the last eighty kilometers of riding directly on the coastline.

In some sections the head wind was so strong that we were literally inching along on the road, and in other sections when this turned into a crosswind, riders were losing complete control of their bikes and were pushed off the road or into other riders. It was definitely one for the books, and we can honestly say that we have never been as happy for a race to end as we were that day.

Following the Euro race scene was a whirlwind of travel, packing, and more travel, as the next morning brought with it a very early departure from Brussels to Toronto for the 2011 Canadian Road Championships. It looks to be an exciting week ahead, and though we are besought with a mix of jet lag and general fatigue, we have high hopes that all the adventures of Europe will sink in over the next few days and we will be able to fully benefit from the mindset and style of racing that we learned over there.

Looking back, we are in consensus that whether or not the racing was everyone’s cup of tea is beside the point, because we are confident beyond a doubt that we emerged better and more well-rounded riders. Despite the blood, sweat, and tears that were shed, there is something uniquely thrilling about European racing; the culture, the fan base, and the sheer nature of the races make for an unforgettable experience.

Thank you so much to the supporters who have enabled this venture; we are thrilled to race again on home soil and will do our very best to represent well this week at Nationals.

Yes we are so honoured to share the lives of our amazing young women…do come and meet them as the race at the Canadian National Cycling Championships in Ontario this weekend. 23-26 June 2011, drop by our Dr. Vie Superfoods tent, meet our girls, eat the foods that fuel them and share their lives.