Just after sunrise on Saturday, September 10, 20-30 elite women took to the start of the 120km competitive Giro portion on the RBC Whistler Grand Fondo. This race from Vancouver to Whistler took riders along the beautiful Sea to Sky Highway and treated the 7,000 participants to their very own car-free lane. 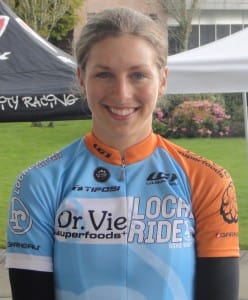 The race was pretty tame throughout the rolling hills leading up to Squamish, as everyone seemed to be conserving their energy for the long stair-step climbs and false flats that lay ahead. Sure enough, the attacks came one after another on the climb leading up to the feed zone, until finally one stuck and an SVC rider was able to establish a 20-second lead. With a lack of commitment from the bigger teams to chase cohesively, we began attacking one another, driving up the pace of the chase group. The gap eventually grew to 40 seconds, but when a few individual riders and I (Jenny) began working together at the front, we brought the escaped rider back. 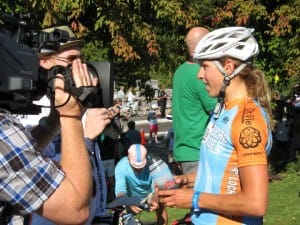 Once the bunch was together again, we hit a headwind and the pace slowed significantly. At the 30km to go mark, four of us who had worked well together in chasing down the previous break, started taking turns launching attacks with hopes that we could get away. Unfortunately, we unable to gain more than a 10-second gap and the headwind was increasing.

Finally, as we entered 10km to go, I attacked hard and looked back to see that no one had followed. I was reluctant to throw down a 100% effort right away, as I tend to be stronger in a sprint finish than a solo time trial. I looked back and saw that the pack was chasing, but I punched it hard up the climbs and rode tempo on the flats until my 20-second gap grew to 36 seconds and I gained some confidence in my move.

With only 6km to go, I knew I had to commit, so I drove the pace as hard as I possibly could all the way to the line taking a well-earned win for the Local Ride/Dr. Vie Superfoods+ Team. The crowd was amazing throughout the entire race, but especially during that final stretch from Creekside to Whistler, which definitely gave me that extra gear to push beyond my limits. I’m extremely happy to finish off a great season with a win! Thanks to everyone that has supported us throughout our first season as a team!

Click here for the Vancouver Sun story on our dear Jenny.

Way to go Jenny. You are a star indeed. Lots of love and hugs.