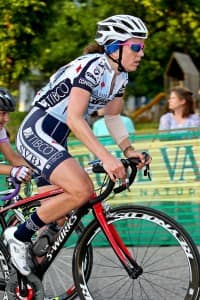 Binghampton, NY – Dr Vie’s Joanne Kiesanowski of USA womens Team TIBCO narrowly missed out on the victory at the Chris Thater Memorial in Binghampton, New York this past weekend as she raced in spite of Hurricane Irene lashing the eastern seaboad.

While the threat of rain from Hurricane Irene loomed over the race much of the time, the first drops held off until about 45 minutes after the race, following all the podium presentations. But as the night wore on, the rain got progressively heavier, eventually forcing the cancellation of the men’s race on Sunday.

“The girls rode one of their best races of the season,” said Team Directeur Sportif/Manager Lisa Hunt. “We wanted to be aggressive and get breaks going and try to get one established that would stay away. But we knew that if it came down to a sprint finish, we still had Jo and Sam (Schneider), and a really strong lead-out.”

The race  was going according to plan, with the Team chasing in-race primes and using these efforts to get moves going on the course around Recreation Park in Binghampton.

While the efforts animated the race, the moves kept coming  back. But, Hunt noted, “as soon as one move was caught another one of our riders would counterattack,” she said.

As the laps counted down, however, it  became apparent that Thater would come down to a sprint finish, a rarity in recent years.

The Team’s plans for the sprint got a bit disrupted with six laps to go when Jennifer Wheeler was taken down in a crash. She was able to
get back up and continue and reintegrated with the pack when it came around on the next lap.

The Team started to get together as the race reached its final laps, but plans once again were upended when Schneider was taken out of
contention by another crash, which also almost took out Carmen Small.

“We had planned to put both Sam and Jo in a position to sprint to try to force Theresa’s hand,” Hunt said. “With Sam out of the sprint, we lined it up for Jo. But not having Sam definitely hurt a bit.”

Wheeler and Alison Powers took on the lead-out duties for Kiesanowski and delivered her to the finish straight for the drag race to the line. The New Zealander used her track power to push to the line for 2nd on the day.

“We did a good job at the end even without Sam,” Hunt said. “Ali rode a fantastic race. It was good to see her back up to
speed and having fun out there. It’s obvious we missed her strength this season.”

Schneider and Small headed out from upstate New York across the pond to Amsterdam ahead of the Holland Ladies Tour, which begins next Tuesday. Surprisingly, this will be Schneider’s first foray into European racing.

“Our women cyclists race around our planet, sometimes during storms, sometimes in the threat of attacks, sometimes during political rife, sometimes during PMS and menstrual difficulties, and sometimes with jetlag.  This year we lost two of our women. Carla Swart died in South Africa when a truck slammed into her during her training.  In Italy Carly Hibberd died during training when she was hit by a vehicle.  Our hearts go our to our girls and women cyclists who are so brave and so motivated to rise to the occassion. May the energies of our planet be with them as the race around our planet,” says Dr. Vie key sponsor and nutrition provider for the women.