Tweet and Share0
Share0
Share0
Pin0
Share0
Tweet0
Share0
‘It’s hard to believe that is has been almost two months since my teammates and I rolled up to the start line in London, and since that moment of wondrous exhilaration when we looked up after crossing the finish line to see that we had won bronze for Canada”, says Jasmin Glaesser, Dr. Vie’s youngest member on the Team Pursuit bronze medal women.  Jasmin also won the Bronze for the most trendy hair- do (braids with her long blonde hair) of all female athletes, with Serena Williams getting Gold!
“Since that moment though I’ve been able to gain a lot of perspective, both looking back, and in contemplating what lies ahead” she says

Leading up to our racing, we were the personification of focus; we spent our final two weeks of training at one of our favourite tracks in Apeldoorn, Holland, where we were far removed (well almost) from the nerves and anxieties that were rooted in all things London.  We were fortunate enough to be accompanied by all the staff that had worked with us for the last few years, and who were now working even harder to allow us to concentrate entirely on our training and preparations.  This ‘calm before the storm’ if you will, will definitely resonate down memory lane as an amazing period of camaraderie, inspiration, and like I mentioned before, undeterred focus.
By the time we did finally arrive in the village, we were ready and brimming with excitement for what was to come. Not even the kerfuffle of several thousand athletes heaped together could throw us off our game as we navigated past athletes of all sizes and shapes (I was definitely on the short end of the spectrum!), celebrities, and competitors without breaking stride or blinking an eye.
I don’t remember much about the last days before we raced, it almost seems like a time whirl in my memory, filled with a roller coaster ride of emotions and tunnel vision snapshots of what was happening around me.  I do remember though, shortly before leaving for the velodrome for our first race, taking a few minutes to sit down on my yoga mat. There was no chance I was going to bust out into a handstand or settle deeply into utkatasana for some last minute strength building- instead I just took some deep breaths and reminded myself of the dream I had been chasing for all those years, which had gotten me through all the challenges and made bearable all the hard work.  That dream had been to be exactly where I was at that moment, and no matter what happened from now on, I was getting to live in my dream. 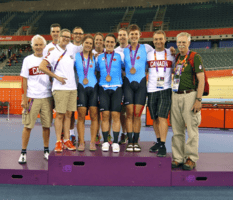 The two days of racing, comprising of a qualification round and two competition rounds were a composition first of extreme disappointment, at qualifying only in fourth, and then unbelievable empowerment when my teammates and I decided that we had more to give than that and came out on fire for the next two rounds.  We ultimately walked away with a bronze medal, but what will stick with me forever is the connection I felt with my team during those races, how, for the first time, I felt like one third of a single unit, rather than one rider on a team of three.  And the moment after the podium presentation when our entire staff snuck onto the podium with us for a group picture, representing that though not everyone had a medal to show for it, we were all winners on that day. These are the memories that will outlive the sparkle of my medal, and that will be the fuel to support and guide me all the way to Rio where hopefully we can help the Canadian flag rise just a bit higher and step onto the top step of the podium.
For now, well its been a bit of a reality check for sure, midterms and papers, and having to shop and cook all by myself definitely brought me off of cloud nine.  Its been a lot of running (and flying) around trying to keep up with my new responsibilities as a role model (still getting used to that one!), catching up on school, checking off my bucket list of west coast hikes, and of course riding my bike. But I wouldn’t have it any other way, and I am already just about bouncing of the walls, and off of my yoga mat in any case, with the prospect of the races to come in the next months and years.
One last thought I want to share with you is that as a lot of people ask me what my favorite part of London was, I want to tell you that it is always about the journey, not about the destination, and that no one moment can sum up the phenomenal experience I have had because it was the conglomeration of years worth of moments and experiences that has made it what it was, and leaving out any of it, ups or downs, would fail to do it justice.”
“Jasmin is an amazing young woman, whom I have had the honour to sponsor over the last few years. I watched her race in London, without her family in the arena, and my heart went out to her. I am not her family, I am not her friend, I am merely the one who believed in her, who monitored her progress and who sponsored her with funds each month so that she could train and race at several events leading up to the great moment. Her tenacity, her love for yoga & her vegetarian lifestyle impress me. Youngsters like Jasmin have a great human potential and they need our nurturing and love. This year, Jasmin will be working with me to nurture other youngsters & young girls to realize their human potential. Stay tuned for our global adventures”, says Dr. Vie.
Dr. Vie, Female Scientist & Entrepeneur
Dr. Vie, Inc.
http://www.DrVie.com