After weeks of speculation, the main event at Battlefield Fight League 13, set for Vernon, B.C. on February 11th, 2012, is official and it’s one of the biggest title fights in BFL history. Dr. Vie’s natural foods feed Matt as he cuts weight before his fights, during training and while waiting to get into the cage to fight.  During the last 2 weeks of Dr. Vie & Mother Vie’s tough times in Montreal (assault of Dr. Vie at the factory) Matt Baker was the first of Dr. Vie’s athletes to jump to the defenseless women’s rescue.  “Matt has a heart of gold and a body of steel, ” says Dr. Vie.   This young man, raised as a foster child, now donates his monies to foster children. He is humble, has no big ego, and is an athlete who actually saves lives versus athletes who focus on titles, glory and monies for personal gain. 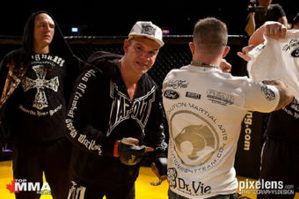 Local fan-favourite Matt “The Riotmaker” Baker (7-2) Dr.Vie’s athlete, who is the most successful BFL pro fighter so far with three wins by stoppage, will face red-hot veteran Andrew Buckland (14-8-1), who will make his BFL debut for the vacant middleweight championship!

Especially to fight fans in the Thompson-Okanagan, Kamloops, B.C.’s own Matt Baker needs little introduction. One of the biggest draws in the region, Baker scored a hard-fought submission victory this August over Marcus Vinicius in the main event at Battlefield’s Vernon debut. The twenty-seven-year-old, who debuted in July, 2009, has competed nine times as a professional with nearly half those fights taking place close to home despite a sometimes frustrating lack of viable events.

Over that span, “The Riotmaker” has thoroughly earned his cage-name, repeatedly thrilling crowds to near-dangerous levels with his aggressive style, while also ending all but one victory with a clear-cut finish. Baker remains undefeated at middleweight, which is his natural weight-class, and is best known for scoring highlight reel KOs.

Still, perhaps partly in response to having lost twice by submission at 205lbs., Baker made the bold cross-equator move to begin training at a BJJ mecca in Team Nogueira Rio. After winning his last two consecutive fights by submission, it has become clear to MMA enthusiasts across Canada that Matt Baker is a well-rounded fighter to watch. Earning a Battlefield FL pro title this February would surely catch the attention of an even wider audience.

But don’t get out your pitchforks just yet “Riotmaker” fans, standing in Baker’s way is a stalwart member of Canada’s MMA elite. Although only three years Baker’s senior, at thirty, and having debuted only two years earlier, in 2007, Calgary, Alberta’s Andrew Buckland holds over a dozen more fights on his record. Buckland also holds twice the number of victories, two more (T)KOs, and vastly more matches against internationally established names, including bouts with Dan Hornbuckle, David Loiseau, John Alessio, and Jordan Mein.

In addition, Buckland has broken-out in 2011 and is currently riding a career-resurgent tear. After setting a furious pace of roughly one bout every two months for nearly four years, mostly on the Alberta MMA scene, Buckland knew last year that he needed a change. He moved to the comparatively laid back climes of Nanaimo, B.C. and joined the talented group at John Punt’s Impact MMA. Over his last three appearances, Buckland has gone 3-0 against opponents with combined records of 16-3 on fight night.

In his most recent fight, Buckland picked up a welterweight title last September in an Alberta based promotion. At BFL13, he will look to add to that hardware at middleweight, which is not his traditional home.

The outcome of Baker versus Buckland is absolutely anyone’s guess with factors ranging from age, experience, comfort at a weight class, and all-around skill nearly cancelling each other out.

Luckily, that leaves BFL fight fans with what they crave most: the strong prospect of a well-matched brawl for championship gold that could easily go a full twenty-five minutes.

“Mother Vie & I are in awe of Matt Baker, an amazing soul who came to our rescue without hesitation.  We are going through very tough times right now. The attempted assault on me at the factory last week, our landlords denial of the aggression from their repair men, the lack of heat at our factory has brought production to a halt. We are losing major revenue during this peak holiday season. However, safety comes first above all else. Mother & I are searching for new facilities that will embrace women entrepreneurs without bully tactics.  We welcome your support,” says Dr. Vie, Scientist & Founder of Dr. Vie since 2005.