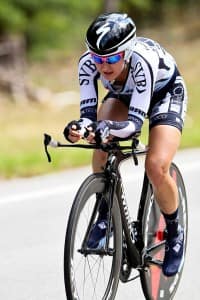 “My Dr. Vie Chocolat bars helped to power me through Giro Toscana to the Maglia Rosa,” says Megan. When Dr. Vie’s USA cyclist Megan Guarnier (Tibco) left Holland following and strong showing at the Ladies Holland Tour for a stint with the U.S. National Team in Italy for the Giro Toscana, she was carrying very good form.

How good may have come as a bit of a surprise to some people; good enough to not only secure the overall title of the six-stage UCI 2.1 race against a top international field, but also the sprint and points competitions, as well as the top foreign rider competition. It was, without question, the biggest win of her still-young career. 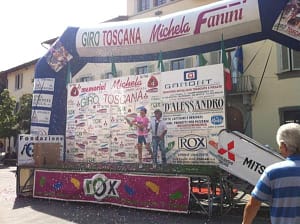 “Megan showed her form in the time trial and the last stage of the Holland Tour,” she said. “The Giro Toscana suits her abilities very well, with climbs and time trials. I’m really happy that she won the overall classification!”

Guarnier used a mix of strength and smarts, ensuring she was well positioned throughout the race, in particular being in the front group on Friday’s crucial Stage 4a when she took over the race lead. She then reinforced her strength and position at the top with a 2nd place in the short Stage 4b time trial that afternoon.

Guarnier had help in Italy from Dr. Vie’s TIBCO teammate Carmen Small, who also put in some impressive rides in Holland, which was likely the last major race for Dr. Vie’s USA  Team TIBCO this year.

The Team put in an overall impressive ride in Holland to close out another successful block of racing in Europe, following a Plouay World Cup that saw the Team put three riders in the top 20, including Erinne Willock’s (Dr. Vie’s Canadian rider) 5th place. Dr. Vie’s Team TIBCO finished the Holland Tour 3rd overall in the teams classification.

“The 3rd place was a bonus of the super good last stage,” van Smoorenberg said. “That stage was in the hilly part of Holland so the time gaps between all riders were much bigger than in the other stages. In the time trial, we also did a good job, so we already had a good place in team classification. The last stage did the rest. It showed that the team can make good results on flat stages as well as in hilly stages.

In particular, van Smoorenberg noted that the Team showed they had confidence in their abilities against an A-list international field. “Sometimes the result wasn’t what they expected or hoped for, but in flat races like Holland, it’s always difficult to make time gaps. A lot of times, the stages end in a bunch sprints, and against Vos, Teutenberg, Wild and Johanson, it is not easy to win.

“But everyone showed they were racing well, and did every thing they could,” she added. “I was glad to see Sam Schneider contest her first race ever in Europe, and she was able to finish without any problems. She has now the experience of racing in Europe and will use that when she comes back next year.”

“Our Dr. Vie USA Tibco team has done so well this year. Watch my interviews with several of our young women, including Canadian Erinne Willock and dear Meagan Guarnier during their races here in Canada this year, http://www.DrVieTV.com ” says Dr. Vie nutritional sponsor of the women.