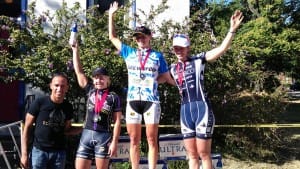 Racing without teammates, the New Zealander racked up consecutive 2nd places in the first three races en route to
her 2nd overall finish.

“It’s a bit harder when you’re on your own,” she said. “You have to be really smart and selective in your tactics. You can’t
chase every break that goes. You have to decide which ones look like they could be dangerous and go after those, but not burn too much energy in the process so you have something left for the finish.”

It turned out that only in the final race did a break stay away. The first three races ended in bunch sprints.

“The bunch finishes were great,” she said. “I just tried to use good positioning and take advantage of other teams’ lead-outs to get to the
finish.”

She did so quite well, taking second to veteran sprinter Laura Van Gilder (Mellow Mushroom) on day one, and a pair of seconds to Lauren Hall (Colavita) on days two and three, before closing with sixth on the final day to seal 2nd overall.

“The racing was great all weekend,” she said. “The race organization did a great job with the courses. I had a lot of fun and it was
awesome training.”

That training is all geared toward the New Zealand Track Omnium National Championships, which happen October 18-19, the first step
toward Kiesanowski qualifying for the New Zealand Olympic Track Team for the 2012 London Games.

“After the national championship, there’s an important track camp, which the national federation uses to select teams for upcoming
world cups,” she explained. “Hopefully that will all go well and I’ll be able to qualify for the Olympics.”

” We are thrilled with Jo’s performance at the GateWay Cup and Chris Tather  in New York (in spite of Hurricane Irene) the previous week.  We wish her the best in the Track Championships in New Zealand. Our Dr. Vie Superfoods BC girls Laura Brown and Stef Roorda join forces with our Dr. Vie USA Tibco Tara Whitten to represent Canada in Track at 2012 next year.  Would be real neat to have our Canadian Track Team compete against our Tibco New Zealander!  Wow!!! , ” says Dr. Vie nutrition supporter of Jo Kiesanowski who trains with Tibco in the USA.