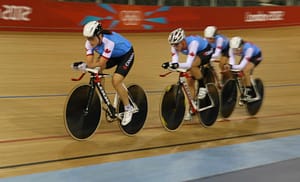 “Heading into the 2012 Olympic Games in London, Team Canada is a definite medal contender in the women’s cycling team pursuit.

Canada will be represented by Tara Whitten of Toronto, Ontario, Gillian Carleton of Victoria, British Columbia and Jasmin Glaesser of Coquitlam, British Columbia. The three finished in third place at the 2012 World Cycling Championships in Melbourne.

Team Canada placed behind co-Olympic favourites Australia and Great Britain. For Canada to reach the podium, they will have to cycle faster than New Zealand and the United States.

According to Canadian Cyclist News, women’s team pursuit, like omnium will be making its Olympic debut at the 2012 Games.

According to the London Olympic Organizing Committee, the fastest qualifying team then faces the fourth fastest, with the second facing the third, the fifth facing the eighth and the sixth facing the seventh.

The winners of 1 vs. 4 and 2 vs. 3 race for a Gold medal, while the remaining fastest two teams from round one battling for a Bronze medal. The medal round takes place August 4 at 9:10 a.m. on Sportsnet.

In women’s team pursuit each team has three cyclists and travel three kilometres. The time recorded is when the last cyclist on a particular team crosses the finish line,” reporter Jeremy Freeborn, London Olympics.

Dr. Vie Superfoods is the sponsor of the three women  (Gillian Carleton, Laura Brown and Jasmin Glaesser) who ride on Dr. Vie’s  Canadian women’s cycling team based in Vancouver and in 2011 Team Tibco with Tara Whitten based out of USA.

” I opted not to take a salary over the last three years so that I could help support our women to achieve their dreams. It was a tough time for me financially, but it was a decision that I made out of love. At that time I had no idea that they would race at the Olympics. I followed them around to their races, closing the factory and stopping production, filming them right in the throes of their races, sharing in their dreams. I am honoured to watch them as they race in London in a few days,” says Dr. Vie.

Dr. Vie’s roving reporter Ms. Fuchek is reporting live from London and will be joining Dr. Vie in London during the interviews.

Lots of love and hugs