Earthquake & tsunami -How to help the survivors 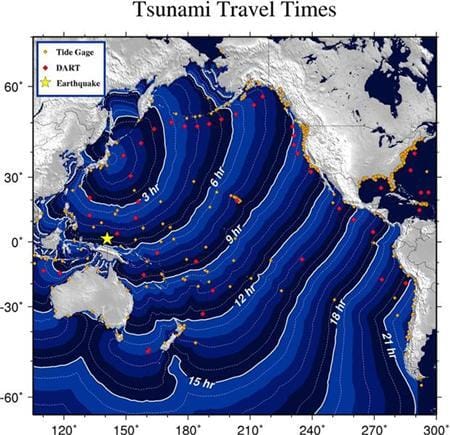 8.9 eathquake hits Japan at 14:49 local time Friday with 30 feet high tsumani waves and more than 30 after shocks. For several hours today the coast of BC, Canada was on alert. The quake was the 5th largest on record. Japan is heavily reliant on nuclear power and the concern of radioactive leaks from some damaged nuclear plants rises.

Tsunami is the Japanese word for “harbour wave.” The Japanese infrastructure for disasters is one of the best in the world.    Within 10 minutes of receiving the warning of todays Tsunami hitting land, most of the inhabitants evacuated  resulting in  fewer deaths than were expected versus the +200,000 deaths from the 9.0 quake and the tsunami of 2004.

Heidi Hollinger, Host of TV 5 Porte Attache around our planet with Dr. Vie Superfoods (Finland, France ..)  was on her way to Asia (Japan & Singapore) on Thursday evening EST with Dr. Vie Superfoods including matcha Japanese green tea Go and G-Shok for tasting by  the Japanese.  “As fate may have it, Heidi and her five man filming crew were close to Asia when the quake struck.  Their flight was diverted to Anchorage, Alaska. “Heidi is ok, we are waiting for her to come home, ” says Heidi’s mother. “We are thankful that dear Heidi and her crew are  safe. We are constantly reminded of the power of nature which is far bigger than us mere mortals,” says Dr. Vie.

Japan is a country constantly bombarded by disasters from earthquakes to tsunamis. This nation is no stranger to planning for disasters with an  annual cost of  $20 million to keep it running.  Numerous trenches, well built buildings,  180 seismic centers send warnings to six regional locations. 80 water borned sensors are monitored 24 hours a day by an earthquake and tsunami observation system (ETOS) spells preparedness. Tsunami warnings are broadcast on loudspeakers, sirens, TV, satellites to the masses including wireless radio service  in out lying areas. Evacuation shelters, emergency water and food supplies are well planned for, but always never enough during catastophes of this nature.

Heavily reliant on nuclear power, the danger of radioactive leaks are now imminent.  Japan has announced its first state of emergency from a nuclear plant in Fukushima.  Nuclear facilitys are tailored to their environment – designed for earthquake resistance. However, with this earthquake one of nuclear reactors damaged by quake, is overheating.  The back-up systems to cool the reactors are non functional even though the reactor has been shut off, rods have been led into the reactors and a meltdown may not occur however the ‘ radio active steam’ has to be released….it is estimated that the radioactivity that is being released will not be harmful to Japan. However, for persons who focus on health, we know otherwise. Radiation is injurious to healthy cells.  We  meditate for this special nation and its missing and its survivors.

The  amazing Japanese nation is well known for its pure food, from hearty rice,  Japanese matcha green tea and tea cermonies,  and sushi to martial arts, healthy lifestyle, dedicated work ethics, astute intellect and concomittent breakthroughs in technology from automative to Sony.  ” The Japanese culture is close to my heart, from their natural ingredients and foods to their deep spirituality, ” says Dr. Vie.

Dr. Vie will donates funds allocated to its Chocolate party scheduled for  today (cancelled) and % of its proceeds from Japanese matcha tea Sports Go balls and G-Shok to the survivors of this heart breaking natural disaster.

“Let us meditate for the safety of those still missing and for the survivors. We send them well wishes and strength to overcome the emotional and physical pain. We hope that the monies from our consumers help, even if only in a small way, to console the trauma that the Japanese are experiencing,” says Dr. Vie.

The number of natural disasters has been rising in the past few years, the energies of our planet are changing, the axes of our earth is on the move so let us take a few minutes to ponder on the value of life, our precious moments on earth and on the need for pure love for ourselves, for humanity and for our planet.

PLEASE DONATE TO JAPAN  via your local REDCROSS

With love for our planet and fellow humans