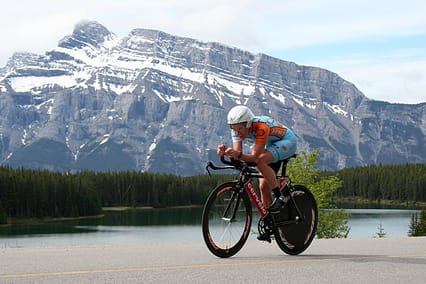 BC Local Ride Dr. Vie Superfoods+ Elite Women’s Cycling Team continues to rock around the globe on two wheels with a recent GC victory at the Banff Bike Fest courtesy of Laura Brown and Steph Roorda (the famous 2 of the Canadian Track Cycling team), June 16-19 and some high-caliber racing in Europe with Jasmin, Jessica, and Jenny. The squad also recently contested the BC Provincial Road Championships on the renowned Westside Classic course in Vancouver. As the season progresses, these women are becoming faster and stronger individually and as a team! Great pictures by Tim S. 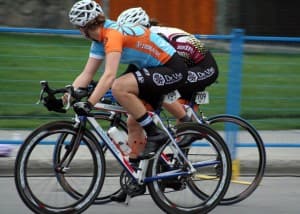 Laura Brown, fast as lightning provides a live report:
“Steph and I headed to beautiful Banff National Park for Bike Fest 2011. It was great to head back to Alberta where we both grew up, spend time with family, and race in one of the finest national parks in the world. The prologue was only 1.5km, but it was uphill. What a leg burner! I finished 2nd, 5 seconds down from Pepper Harlton and Steph finished 9th.The following day was the Lake Louise Road Race. This is an out-and-back course with rolling hills. Holding true to the testament of the race organizers to respect the park, the course was shortened to avoid interference with denning wolves at the turn around – so it was only 70km. I sat on Steph’s wheel with about 15km to go and ~200m before the finish I launched my attack off her wheel, made a gap on the group, and won the road race. I was given a 10 sec time bonus and thus put me in 1st.

Stage 2 was the hilly, 21km Lake Minnewanka time trial. I was really looking forward to this stage, as I was hoping to put more time into the other riders as well as test myself for our upcoming National Championships Time Trial, which is the same distance with a similar profile. It has taken me a couple of years, but I finally won it. Steph finished with a respectable 6th and we were looking good for overall placings going into the criterium. The downtown crit was held that evening, and knowing I had 1:45 over 2nd place and Steph was sitting in 5th, we did everything we could to defend the lead and try to move Steph up. The race was fast off the gun and with a hairpin in the 1st corner, it was strung out immediately. With 2 laps to go I drilled it on the front to lead Steph out for a photo-finish 2nd place. I ended up winning overall GC and Steph finished 5th overall. Despite the cold and wet conditions, it was a fun and successful 3 days of racing.”

There is arguably no better location to hold a road cycling stage race than Banff and the magnificant Rocky Mountains. Breathtaking backdrops added an extra dimension to the world-class race courses and high level of competition that the 2011 Banff Bike Fest provided. Laura and Steph (who both originally hail from Alberta) thrived in the thin air and cool wet weather, working together to allow Laura to claim the overall GC title. The three-day event opened with a short 1.5km Prologue hill climb in which Laura placed second. She then went on to win the 70km Lake Louise Road Race on Friday. The next morning, she took another victory, winning the 21km hilly time trial. The final showcase stage, a criterium through downtown Banff, saw Laura lead Steph out in the final sprint in which Steph just missed out on the win in a photo-finish, but earned the second podium spot.

BC Road Championships – Vancouver, BC – June 12

The BC Road Cycling Championships, held in Vancouver on a gorgeous closed course near UBC, saw strong competition and an exciting Queen of the Mountain battle. While half the team was still racing in Europe, Laura, Steph and Rachel took to the rolling course and played an active role in the hunt for victory. The race was aggressive, but no moves managed to stick, and the eight-lap 84km race ended in a bunch sprint, which was won by Leah Guloien (Missing Link Coaching Systems/Specialized). The top Local Ride/Dr. Vie Superfoods+ rider was Laura in fifth, with Steph 12th, and Rachel 16th.

Meet our elite women Laura Brown and Steph Roorda featured above, at the Canadian National Cycling Championships in Burlington Ontario this weekend 23-26 June 2011. Drop by our Dr. Vie Superfoods tent, enjoy our foods, meet our athletes and get tips on sports and fitness directly from them