1 February 2011 The Local Ride/Dr. Vie Superfoods+ Women’s Cycling Team sprang into action this month with the team’s first training camp held in Langley, BC last weekend, which coincided with the squad’s first podium of the year, courtesy of Laura Brown and Steph Roorda, who hammered to World Cup silver on the track together with Canadian team mate, Tara Whitten. 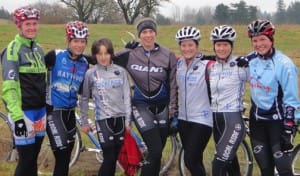 “We really couldn’t have imagined a better start to the year and for this team as a whole,” said Team Manager Barry Lyster. “A World Cup medal on the same weekend as our first camp – it’s the best possible way to motivate these talented women.”

While Roorda and Brown flexed their track cycling muscles in Beijing, the rest of the riders bonded and trained during two weekend rides on the roads of Langley, BC. Members of last year’s Local Ride Racing squad, Lisa Perlmutter, Jenelle Cassidy and Rachel Canning were joined by new members Jasmin Glaesser, Jessica Hannah, and Sarah Coney. Missing was Jenny Lehmann, who had prior commitments.

“The scope and impact of this team is evident with Roorda and Brown winning silver at a track World Cup, while the rest of the team was training and mentoring a young rider who will become a mainstay of BC cycling for years to come,” said Team Director Jeremy Storie. For Dr. VIE TV interview with Jeremy Storie click here.

The six women participating in the camp logged some endurance miles in the Fraser Valley with over four hours in the saddle on Saturday, including team tempo sessions and an ascent of the steady but challenging Mount Sumas climb. Maggie Coles-Lyster, 11-year-old daughter of Team Manager and Local Ride Bike Shop owner Barry Lyster, got a taste of the elite cycling world when she joined the team for part of the ride. On Saturday evening, the team held meetings and a pot luck dinner.

Sunday was back to business with three and a half hours on the road, and some team chases and lead-out drills.

“All in all, it was a solid weekend of training,” said Storie. But perhaps more importantly the team can look forward to the upcoming season knowing that they will have the personnel that can get the job done.”

The Local Ride / Dr. Vie Superfoods+ Team is poised for a successful season on the regional, provincial, national, and world stage. The squad will be releasing its 2011 race schedule soon.

Dr. Vie Superfoods+ – A Montréal-based family owned company with a mission to promote healthy lives in communities across the planet through their line of 100% natural low-glycemic, vegan, low-allergenic foods, 100% bio-compostable paper wrappers, wellness training programs and educational materials for all ages