Dr. Vie’s 3 Canadian women have been selected to race among the world’s best at the London Olympics 3-4 August 2012. Laura Brown, Gillian Carleton and the youngest rider Jasmin Glaesser are all on Dr. Vie’s SuperWomen team. Watch them live on CTV 3-4 August 2012.

The Local Ride/Dr. Vie Superfoods+ elite women’s cycling team presented by Local Ride Bike Shop in Maple Ridge, BC, and Montreal-based Dr. Vie Superfoods+, is proud to announce that two of the squad’s riders have been officially nominated to the Canadian Olympic Track Cycling Team at the London 2012 Summer Games.

“The fact that two riders from our team will represent Canada at the world’s biggest sporting event is confirmation that there is value in what we are doing, which is to promote women’s cycling and to support and develop our athletes on their path to greatness,” said Team Manager Barry Lyster. “I am so proud of what these amazing women have achieved and I know there is more to come.”

“I have been supporting our women since their humble beginnings on the team pursuit, with the legendary Laura Brown and Steph Roorda being the first riders on the team. Recently joined by my other two riders Jasmin Glaesser and Gillian Carleton. I’ve watched them race at velodromes at high speeds and at road races. I am so thrilled for them as they now realize their dreams,” says Dr. Vie.

British Columbia’s Laura Brown and Gillian Carleton will proudly wear the maple leaf at their first Olympic Games in August. The duo will be joined by fellow Dr. Vie Superfoods+ athlete Jasmin Glaesser of Coquitlam, BC, and three-time World Champion Tara Whitten of Edmonton, Alberta, in the Women’s Team Pursuit event. This year marks the first time the Team Pursuit will be offered as an Olympic discipline for women.

Canada’s Women’s Team Pursuit squad won silver at the London Olympic Test Event/World Cup in January, gold at the Pan American Championships in March, and bronze at the World Championships in April. The team is aiming for a medal London.

“I’m very excited to be selected to the Canadian Track Cycling Team to race at the Olympics! Our women’s team pursuit program continues to improve every day, and I can’t wait to see the kind of rides we’ll produce in London. I’m also very proud to be representing my country at such an exciting time, with Canadian cyclists dominating international competition in road and mountain bike as well, and I’m confident that cycling will contribute greatly to Canada’s medal count this summer,” said Carleton.

Laura Brown said: “I am both honoured and relieved to hear that I have been nominated to the Canadian Olympic Team. I have been involved with the Canadian Women’s Team Pursuit since its inception in 2009, when we won our first World Cup gold medal. The team has come a long way since then in terms of its depth and capacity. Our Olympic trials were very competitive as we are now one of the best teams in the world. Competing at the Olympic Games has been a dream of mine since I was a kid. I feel overjoyed to see my hard work and dedication come to fruition now and in August, when we will compete for an Olympic medal.”

Jasmin our youngest rider says: “With just over one month to go until we roll up to the line for our Olympic debut, we are working harder than ever to make sure we leave no stone unturned in our quest for a medal.  Fortunately, these preparations included a respite from the track after Worlds, with a temporary switch of focus to the road.  This was a welcomed relief after a winter of mostly indoor training, and I happily embraced the change of scenery.  To start off my mini road season I raced at The Tour of the Gila, followed by Gatineau Grand Prix, and then the inaugural Exergy Tour.  The latter was an amazing five day stage race in Boise, Idaho featuring the world’s best female cyclists, and I was very exited to walk away with the Best Young Rider jersey.  Then it was back on the track to prepare for our Olympic trials- two days of stiff competition.  I was very honoured to be named to the team, a dream come true!  No time to celebrate though as I switched modes once again, this time to prepare for the Road National Championships in Lac Megantic, QC.  Always great to race on home soil and with the country’s best!  Now its crunch time though and there is only goal on the horizon, London 2012!!” 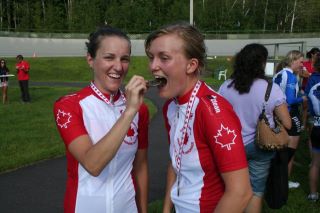 To further exemplify the strength of the Local Ride/Dr. Vie Superfoods+ team, Steph Roorda was also nominated to the Canadian Olympic team’s short list, but she did not make the final selection. The Local Ride/Dr. Vie Superfoods+ team and its supporters congratulate Roorda for her hard work and look forward to seeing her vie for the podium alongside teammates Lisa Howard, Rachel Canning, and guest rider, Maple Ridge’s Jean Ann Berkenpas, at BC Superweek – a week of high-profile international road racing in BC’s Lower Mainland, July 6-15

Watch them live on CTV 3-4 August 2012. Send them your cheers and love on our Facebook pages. http://www.facebook.com/Dr.VieSuperfoods

With lots of love and hugs women.