St. Valentine – two love stories teach us how to be compassionate and loving

“Love looks not with the eyes, but with the mind, and therefore is winged Cupid painted blind,” A Midsummer Night’s Dream, 1:1:231-2, Sir William Shakespeare.

Well my dear reader ’tis February 2012, the month of love celebrated by lovers, loved ones and anyone who embraces love.  I thought it befitting to recant a story of the Parvathi the Hindu Goddess of love. I remember curling up on my GrandMother’s bed each night listening to the many stories of the Gods and Goddesses so it is my time to tell one such story.

The story set in India in the time of the Gods & Goddesses living on earth goes like this:

Lord Shiva the supreme power of the world  lived a simple life in the mountains of Kailash. He grieved the loss of his wife Goddess Sati ( who had sacrificed herself after being denounced by her father King Daksha).  Goddess Parvati, an incarnation of Goddess Sati, was sent to earth to reunite with Lord Shiva. As Parvati grew into a young woman she began to woo Lord Shiva. Lord Shiva was impervious to her attempts. Yet Goddess Parvati was dedicated to her role, consumed with love and devoted her life and daily tasks to making Lord Shiva aware of her. Many stories are told of the severe sacrifices that she made and the long fasts that she underwent in vain. 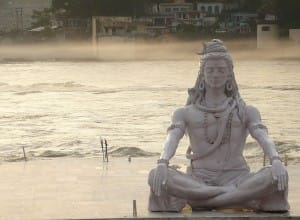 Goddess Parvati began to meditate on her inner powers until finally Lord Shiva was unable to avoid the love that she exuded. To Parvati it was an aspiration to the state of nirvana. Together Lord Shiva and Parvati (Shakti) attained absolute power and their love story is told and retold to this day.  Their offsprings Lord Ganesh (elephant head) and Lord Muraga are also meditated throughout the times, especially during this month of February.

So people ask : “How did Lord Ganesh end up with an elephant head?”  This is a story that must be told here, even though I digress:

Lord Ganesh was protecting the bathing area of his mother Parvati when Lord Shiva in one of his myriad of forms of manifestations tried to approach Parvati. Lord Ganesh could not recognize Lord Shiva and tried to stop him. In a flash of rage Lord Shiva beheaded Lord Ganesha. When Parvati realized what had happened Lord Shiva restored life to Lord Ganesh, and replaced his head with that of an elephants. To this day Lord Ganesh is known as the protector and banisher of obstacles.

Another such story tells of Lord Shiva and Goddess Parvati sitting on their throne with their two sons in front of them. They asked their sons to go around the world. The one who completed the journey the fastest would be rewarded. So the Lord Muraga bounded off immediately. Lord Ganesh paused then walked around the throne on which his parents were seated and stood in front of them. Lord Shiva asked of him:

“Son why are you still here? We asked you to compete with your brother and go around the world?”

To which Lord Ganesh answered:

“Father, but I went around  you and Mother. You are my world.”

Love pervades all space and time continuums. Love knows no boundary of age, color, culture yet it is the essence of human kind. When we live life from a core of love then we are able to reach deep within our true self and reach our highest form of being. In the Vedas we learn of the 7 Chakras, their purpose and our journey from the lowest Chakra to the highest Chakra denoted by the purple lotus. When we function from our 7th Chakra then we have optimized our being.

We note the same message in multitudes of self-development texts  for instance Dr. Dyer ‘s description of the four levels of development  from the athlete, to warrior, to statesman and finally to spirit mentality. In all cultures and in all spiritual teachings the same message pervades: when we reach the stage of unconditional love, when we give without any hope of receiving, then we are one with the energies of our planet and cosmos.

Some humans reach this state very early in their lives, for others they may never know what this state feels like. Meditation, yoga, good deeds, good thoughts are means of attaining the 7th Chakra. From a physiological stand point, our cellular activity resonates ideally when we engage in loving behavior and thoughts. YES, thoughts are the driving force of cellular generation and regeneration. We are what we think: when we think wonderful, pure, loving thoughts our cells vibrate at its optimal level and there is no limit to the powers that we can capitalize on. These powers are manifested in saints over the ages, many of whom live in the mountains and villages of India. Many of whom the holy scriptures of cultures refer to as Jesus Christ, Lord Krishna, Prophet Mohammed and more.

Well for now, ignore all of the above. Instead think on the time that you felt pure love. The simplest example would be when you were in love. Did you feel that rush of goodness in you, did you feel that you could do anything, that you can achieve anything. Yes this is just one experience of the power of love. Now imagine if you were feeling those emotions everyday? If you function from the core of love then you obtain bliss.

I remember the love story of my parents: Father Vie’s gaze fell upon Mother Vie during a spiritual festival in South Africa. Father raised an apple to Mother and the rest was history. They were married in a few months.  In the well known  Hindu temple in India  devotees travel from around the world to climb the 11 km stretch of steps to reach temple of the God & Goddess whom my parents bear the names of. Everything about my parents life together was momentous. As Father breathed his last breath he held out his hand cupped as an apple to Mother symbolizing their love, as we witnessed his demise.

Love is an incredible source of energy that is FREE. It is more powerful than any medication or drug. It can invoke the most incredible and most compassionate manifestations in humans. During this month of February across India and its sister countries like South Africa, thousands of devotees engage in a month of fasting to culminate in amazing feats. Heavy chariots will be pulled by devotees  through clasps embedded into their backs. Heavy needles laden with fruit will be pierced into tongues. Others will carry heavy kavadys on their shoulders for long distances barefoot on heated roads. Yet others will walk across fire-pits with kavadys as calm as if they were walking in water. The event is dedicated to Lord Muraga who used his holy Vel (spear) to win an inter-planetary war.

So what is pure love? Pure love is a state of being that can be attained through pure thoughts and pure deeds of kindness, compassion and humility. Anyone can practice love anywhere in the world without any financial expense.

This 2012 when so many call for the destruction of our planet, a revisit from the Gods / creatures from other planets, or the rebirth of a new age, many of us humans seek to experience the very best on earth.

When we function from a core of love we nurture our planet and we can feel the greatest peace.