(Ottawa, ON – May 3, 2012) The Canadian Cycling Association is proud to unveil the list of athletes who have qualified for the 2012 Olympic Selection Pool for track cycling, a short-list group of riders from which the 2012 Olympic Team nominations will be drawn upon.

For the 2012 Olympic Games, Canada has qualified in both men and women Omnium events, the women’s team pursuit, the women’s sprint and keirin, and the men’s keirin.

Jacques Landry, Director of High performance and Team Leader of the 2012 Canadian team heading to London, is confident the team will be strong contenders for medals in London. “Our team is proud. Proud about the successes we’ve had around the world, and proud to represent Canada in doing so. We have covered all our bases into our preparations for the Games, and invested energy and resources in the track program, and we have clearly seen the return on those investments these past two seasons.”

Head Coach of the Canadian Track Cycling Team, Richard Wooles: “It’s great to see such a strong team be announced to the pool. Our Canadian athletes are determined to succeed in London. We put a plan in place four years ago, and we are starting to see some of the benefit of the great support provided. We have some of the best athletes in the world, and with the structure and support team we have in place I have a strong feeling we will reach our goals in London.”

Athletes in the Olympic selection pool have all qualified as a result of their performances since the UCI Qualification window has opened. As per the board-approved Selection guidelines, the High Performance advisory committee of the Canadian Cycling Association, comprised of many specialists in each respective disciplines, will gather and proceed with the selection of the athletes to be nominated to the 2012 Canadian Olympic Team, and to represent Canada at the upcoming Olympic Games in London, UK. 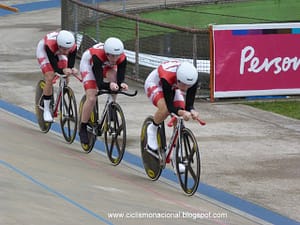 Each of the four women from Dr. Vie’s athletic team have won medals at various UCI World Cups this season. We will be keeping “track” of our women as the countdown begins.

Jasmin Glaesser the youngest on the team at 19 years of age, recently completed Dr. Vie Academy Health Training. To get access to your free Health Training click here