The Local Ride/Dr. Vie Superfoods+ Elite Women’s Cycling Team continued to tear up the roads on its early-season racing campaign. Jenny upped her game in the EV Spring Series to secure multiple top five’s, including a third-place ride with the help of her team mates Sarah and Jess, and Local Ride Racing brothers Mike and Steve. Remember, they were racing amongst a mostly male field. Read Steve’s report here.  Local Ride Dr Vie Superfoods is a based in Maple Ridge, BC and promotes healthy lifestyles  of local BC youngsters.

Plus, the squad made its debut south of the border at the Cherry Blossom Cycling Classic Stage Race in Oregon, April 1-3 with great success and went on to win the Barry’s Roubaix road race on April 10. This weekend the team is in Walla Walla, WA for the Tour of Walla Walla.

The Local Ride/Dr. Vie Superfoods+ team continued its upswing with a fantastic win in Pitt Meadows at the Barry’s Roubaix Road Race presented by co-title-sponsor Local Ride Bike Shop last weekend. Jasmin won the sprint for victory out of a three-woman breakaway, with team mate Jessica placing third. Race conditions were some of the hardest the riders had ever encountered with gusting winds, cold temperatures, and driving rain combined with mud and grit spraying off the 4km section of dyke competitiors had to traverse on each of the race’s nine 10km laps. Read the articles in the Maple Ridge Times here and Maple Ridge News here. 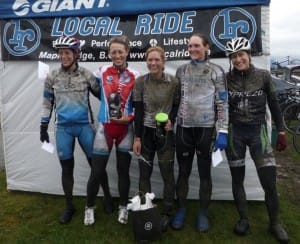 LR/Dr. Vie’s Jessica and Jenny finished first and second on the final stage of the Cherry Blossom Cycling Classic Stage Race in The Dalles, Oregon, April 1-3, as the squad raced together for the first time in the elite women’s ranks as part of a BC Team project. Jessica went on to take second overall in the four-event competition, just 16s shy of the GC win, while Jasmin took fifth overall after placing second on Stage 1. The five-woman team of Jessica, Jasmin, Jenny, Sarah, and Sandra worked very well together and made themselves known amongst their competitors as the strong and aggressive riders they are. Read Team Director Jeremy’s race report here.

Laura, Steph, and Jasmin were on the track at the UCI World Track Cycling Championships in Apeldoorn, Netherlands with the Canadian National team. Laura raced the Team Pursuit with World Omnium Champ Tara Whitten and multiple Olympic medalist Clara Hughes to finish sixth in the competition. Steph accompanied the squad as alternate, while Jasmin was soaking up as much of the experience as possible to ready herself for next track season with the Canadian squad. Read Laura’s race report here and Jasmin’s report here.

” I am so excited to be part of the show, ” says Stef during her exciting interview with Dr. Vie overlooking the Coal Harbour and stunning North Vancouver snow clad mountains this afternoon.