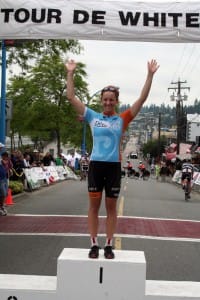 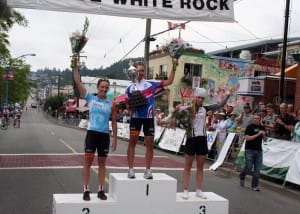 Did you know the Tour de Whiterock has been going on for ~30 years? This historical cycling race is a grueling test of endurance, strength, and attrition. Dr. Vie’s team of women tackled the steep seaside hills of the City of White Rock with Semiahmoo Bay and Mount Baker providing a picturesque backdrop as spectators lined the waterfront or watched the action from restaurants along Marine Drive

Tour de Whiterock is a hard race and Dr. Vie’s team of women dominated. The amazing women had some hiccups during Superweek with tactics and were defeated many times in sprint finishes and so forth. But when they came together as a team for the White Rock weekend, they raced their bikes as hard as they could, and found much success.

Great teamwork all around by Laura, Jasmin, Jenny, and Steph!,

“We are honoured and thrilled to have won it this time around,” says Laura.

“The inaugural UBC Grand Prix took place on the Tuesday of  2011 BC Superweek. Taking place in front of the Book Store on campus, is was a fantastic event and I (Steph Roorda) am hoping that is will continue to be on the cycling calendar for a years to come. Early on in the race, the girls on Local Ride Dr Vie Superfoods+ were making the race challenging with lots of attacks and counterattacks. We were a unit working together to make the race hard and fast, which is a style of racing that suits our team the best. After a few minutes I managed to get away with one other girl Noe Cooper from the local Trek Red Truck team. We manage to stay away for a large part of the race but eventually the pack caught up to us. Shortly after that Jasmin made an attack and was away for a few laps on her own, where she managed to pick up a few primes. She also was swallowed up by the pack. Near the end of the race the bell rang for the Crowd Prime and Jasmin scooped that up, while Laura made a counter attack and she was followed by another Trek Red truck girl, Shani. They stayed away for the remainder of the race and Laura was unfortunately beat in the end. She took second place, and Jenny finished 4th in the group.” says Steph Roorda one of our amazing young women on our BC team.

“Mother Vie & I are happy to support our BC women cyclists so that they can realize their dreams. We are not a mega company with mega funds, but we are dedicated to helping youngsters and women to achieve their optimum in life,” says Dr. Vie, Founder of Dr. Vie, Inc.

Meet our BC women as they compete at the Canadian National Track Championships in Bromont 9-11 August at the outdoor Velodrome. Laura Brown, Steph Roorda, Jasmine Glaesser and Rachel Canning from our Dr. Vie BC team will be racing. We invite you to join us, watch these women speed around the Velodrome track and meet them at our tent.