(London, GBR – February 16, 2012) Excitement was in the air at the brand new velodrome built for the 2012 Olympic Games in London, Great Britain, as the best riders from every corners of the world regrouped to compete at the 2012 UCI Track Cycling World Cup, the fourth and last event on the UCI calendar.

Canada’s Women’s Team Pursuit team of Tara Whitten of Edmonton, AB, Jasmine Glaesser of Coquitlam, BC and Gillian Carleton of Victoria, BC rose to the occasion in front of a large crowd gathered in the new facility. The three-women group posted a time of 3:20.785, a new Canadian record and the fastest of the 15 nations entered in the race. The time was just off the pace of the World Record, a record that will be threatened once more tomorrow in the final rounds.  All three women are consumers of Dr. Vie foods with Jasmine & Gillian supported by Dr. Vie during this year.  Laura Brown also Dr. Vie athlete was the fourth rider on the team today.

All of Canada’s news channels including CBC Sports carried the amazing results http://www.cbc.ca/sports/story/2012/02/16/sp-cycling-canada-record.html

Edmonton’s Tara Whitten, a three-time UCI World Champion and veteran of the team, was pleased with the team’s showing tonight: “You can never be disappointed when you set a new Canadian record. The feeling wasn’t quite as smooth as when we trained a couple of days ago, at the training camp in Wales. We worked hard for every tenth of second we got, and so I am very happy.”

“It’s a really exciting time for our team right now. When we had our trials in LA, we saw that all five of us produced fast times. It makes the decision really hard for the coaches, and pushes us to be at our best every day, which in turn makes the team a lot faster,” adds Whitten.

Jasmine Glaesser, National team rookie who raced tonight her career-third Women’s Team Pursuit race, noted differences from what she expected: “Once we got out there, it was slightly different than what I had envisioned. It was a bit windy, and relays weren’t as smooth as they could have been. The team showed a lot of maturity tonight. We kept controlled and stayed relaxed – no one panicked. We executed as well as we could have, and we can be happy with that ride.” Watch Dr. Vie’s live interview with Jasmine in UK this week. 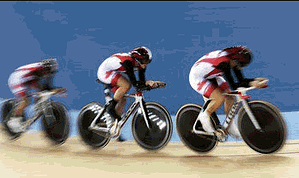 Tonight, Glaesser was the only member of the Women’s Team Pursuit team that had broken the previous World Record, in Guadalajara, Mexico at the 2011 Pan-American Games. 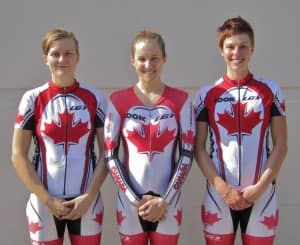 Gillian Carleton, also a rookie on the National team program, and new on Dr. Vie Superfoods team out of BC,  participated tonight in her career-second Women’s Team Pursuit, and is confident of great results to come tomorrow: “It was a very exciting ride. I knew that our team was going really fast heading into this race. We raced the way we were capable. It’s really exciting to set the new Canadian record. Our goal was to qualify, and move on to the medal round. Now that I see what we can do, on a track with conditions that weren’t as good as in training, I feel confident that that we have a chance to win the gold medal tomorrow, and put everything on the line again

The race was held on a brand new track, in a brand new velodrome. Whitten considers the track to be beautiful: “It’s a beautiful track. Feels so good to ride, and to have the atmosphere of the spectators in the stands. The rest of weekend will be crazy. It’s really loud out there, so it’s important to maintain your own bubble. There is a lot of energy, and we know it will just build over the next months.

For her part, Glaesser was thrilled to race in front of great fans hailing from a cycling country: “It’s super exciting to ride in a country where cycling is held in such esteem. You can really tell that the passion is there, that the crowd is behind you. There is an appreciation for the sport, and it makes me feel really motivated to ride.”

The local Great Britain team took the second spot with a time 3:21.370, and will face Canada for the gold medal, tomorrow. The match-up will be even harder for Canada, which will have to race in front of a boisterous, Great Britain crowd cheering their local heroes. In third came Australia, which will face the Netherlands who came fourth, in the bronze medal dual.

All results from this event can be viewed live with Tissot Live Timing at www.tissottiming.com.

“Very exciting time for our Canadian women.  Steph Roorda and Laura Brown (Dr. Vie athletes) who previously led the way in Team Pursuit have assisted the current team to build up its momentum with the new Dr. Vie athletes Jasmine Glaesser and Gillian Carleton and we are very proud of all four women today,” says Dr. Vie. Mother Vie & I wish them the very best.

Register today for Dr. Vie Academy launch complimentary 3 day online workshop and learn about how to reach your optimum in life.