In Melbourne, Australia, it was a great day for the Canadian Track Cycling Team at the 2012 UCI Track World Championships  as Canada won a silver medal in the women’s points race and a bronze medal in the women’s team pursuit on Thursday. Both women are Dr. Vie athletes, Jasmin Glaesser and Gillian Carleton with Jasmin winning 2 medals today.

The Women’s Team Pursuit squad comprised of Tara Whitten (Edmonton, AB), Jasmin Glaesser (Coquitlam, BC) and Gillian Carleton (Victoria, BC) took the bronze medal by edging the New Zealand squad in the bronze medal race, posting a time of 3:19.629. 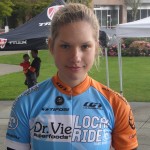 “This is our first World Championship medal for the team pursuit program, and it is a great position to be in four months out from the Olympic Games! Our main focus for this season was the London World Cup, so it was a pretty quick turn-around to build back up for these World Championships. We chose to focus a lot on technique after London, and I think we executed two technically near-perfect rides to secure the bronze medal.”

Added Whitten : “Both Australia and Great Britain showed today that the level of the Women’s Team Pursuit is moving higher and higher, but we are excited by the challenge of rising to the next level at the Olympics,” said Tara Whitten after the race.

Gillian Carleton, a young rider who is making a spectacular run after suffering from a broken pelvis in December, was excited for this race: “We were really happy with our ride – after making the London World Cup our biggest priority race this season, it was nice to come to Melbourne and do a good time, even though we didn’t prepare quite as much. It’s also very motivating to see the Aussies and the Brits constantly lowering the world record.”

For Jasmin Glaesser, she stepped on the podium in every international Women’s Team Pursuit race in which she participated this season — the 2011 Pan-American Games, the 2011 Pan-American Championships, the UCI World Cup in London, and now the 2012 UCI World Championships. The 19-year old who just received her Canadian citizenship this fall before the Pan-American Games, explains that Canada can still be faster and climb higher on the podium.

“I am really proud to have been a part of the women’s team pursuit here at the World Championships in Melbourne; we were up against some tough competition but kept our focus entirely on producing the best ride that we could.  Of course there is room for improvement, not just in placing, but in our execution and technique as well.”

The Canadian Women’s Team Pursuit squad, which was already qualified for the 2012 Games, entered this event with the objectives to fine tune technical elements of the team pursuit, notably exchanges between riders.

A few hours later, In the women’s points’ race, Jasmin Glaesser won the silver medal, her second medal of the day. Glaesser went on to finish second in the fourth sprint and won the fifth sprint to break the ice and get on the scoreboard, and then went off to gain a full lap over the field to secure the maximum 20 points, which put her tied for first place with Russian Anastasia Chulkova with only two sprints to go. Chulkova surpassed Glaesser in tenth and final sprint, scoring three points to ride to the gold medal.

“I trained mostly for the Women’s Team Pursuit. Everytime you come to World Championships, this is an amazing opportunity. I had a chance to race the Points race, and ended up with the silver medal – its fantastic,” said Glaesser, winning the two medals at her first appearance at World Championships. “It definitely took a few laps to get into the groove, having raced two team pursuit earlier in the day. I was certainly tired, but having been on the podium just before the race, there was a little bit of adrenaline in the system, and that helped out.”

“Jasmin is an amazing young woman as is Gillian Carleton and Mother Vie and I are honoured to support these young women as they aspires to reach their best and represent Canada,” says Dr. Vie sponsor of Jasmin and Dr. Vie Superfoods Canadian Womens Cycling Team.