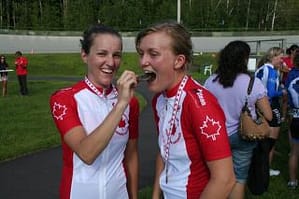 (Mar del Plata, ARG – March 05, 2012) Canada has proven again it has great depth in the Women’s Team Pursuit, winning the gold medal 2012 UCI Pan-American Championships in Mar Del Plata. What a win for Dr. Vie’s two Canadian athletes on Dr. Vie Superfoods womens cycling team based out of Vancouver. Laura Brown and Steph Roorda did it yet again!

As reported by Canadian Cycling Association: The Canadian squad, comprised of Laura Brown of Vancouver & BC, Stephanie Roorda, also of Vancouver and on Dr. Vie Superfoods womens cycling team and Allison Beveridge of Calgary, AB qualified with the second fastest qualifying time in the morning session, earning their ticket to the Gold Medal race.

In the decisive race, the powerful Canadian team faced off Venezuela, the fastest qualifiers, in the final. Despite posting a slower qualifying time than their rivals, the Canadian women stepped up with a new race place, and crossed the line in first place by posting the golden time of 3:33.540.

The track in Mar Del Plata is an uncovered, outdoor track made of concrete.

Laura Brown was thrilled with the victory, which came after lots of rain delays. “We qualified second this morning next to Venezuela but we had so much to improve on that it was a motivating position to be in. We reassessed our race plan and came up with something new and executed it perfectly. Anytime you nail a team pursuit, it feels pretty amazing. Steph and I have been national team teammates for many years now and it was great to be able to ride with youngster Allison Beveridge and get her hooked on WTP!” 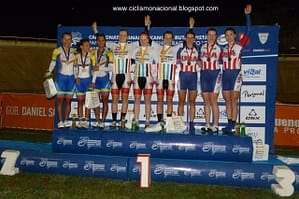 A few weeks ago, at the UCI World Cup in London, Canada had three different riders competing in the Women’s Team Pursuit, and twice broke the Canadian mark in the event. At the London race yet again two of Dr. Vie’s women on Dr. Vie Superfoods team Jasmin Glaesser and Gillian Carelton won silver.

The performance in Argentina will significantly help Canada secure a spot for the Olympic Games. Entering the event, Canada was sitting in seventh place of the UCI Olympic standings, thanks in large part due to the silver medal performance posted during the Olympic Test event in London.

Both Stephanie Roorda and Laura Brown, seasoned veterans on the Canadian Track Cycling Team, were part of the Canadian Team who won the Gold medal at the 2011 Pan-American Games in Guadalajara, Mexico.

Allison Beveridge, who is just coming out of the Junior ranks, stepped up and rose to the challenge to race at this event. Beveridge took a break from her reading week to come and race. Since the last Los Angeles training session in December, Beveridge has been training in Calgary, on rollers, while attending the University of Calgary.

In December, Beveridge posted a strong time at the trials in Los Angeles, and showed great technical abilities. Early on, she was able to understand the rider transitions during the race, and earned her way to the Pan-American Championships based on her camp performance.

In terms of Olympic qualifications, this Gold medal will give Canada the maximum numbers of UCI points at grab. The points will allow Canada to head into the UCI World Championships without worrying about times and results, but to focus instead on improving on the technical aspects

The 2012 UCI World Championships will be the last time the Canadian Women’s Team Pursuit will race prior to the Olympic Games.
Watch Dr. Vie interview with  Laura brown this year.

Mother View and I are very honoured to be supporting these amazing young women Laura Brown and Steph Roorda. They are incredible role models for all youngsters, women and athletes.

Get your free 3 Health Seminars to Empower you to function at your best. Click here

We love you women.