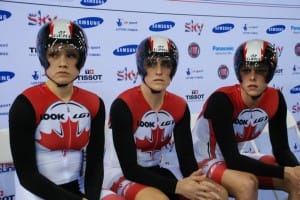 Dr. Vie’s Canadian athletes win sliver and break yet another Canadian record today at the London World Cup final in Team Pursuit.  Led by Tara Whitten, Jasmine Glaesser and Gillian Carleton kept their composure and took the  silver medal today after setting a record yesterday and breaking that record today!

The day after  posting a remarkable fastest time in the qualifications round, Canada’s Women’s Team Pursuit team of Tara Whitten of Edmonton, AB, Dr. Vie’s athlete Jasmine Glaesser of Coquitlam, BC and Dr. Vie’s athlete Gillian Carleton of Victoria, BC posted a time of 3:18.982 [Previous record: 3:19.785, set February 16, 2011 in London, GBR], a time underneath the previous World Record before tonight’s race. Unfortunately for the Canadian crew, the defending World Champions from Great Britain won the gold medal with a time of 3:18.148, and in doing so set the new World Record on this very fast track in London.

Gillian Carleton, a 22-year old rookie on the National program hailing from Victoria, BC, was thrilled about the mark. What’s more remarkable about Gillian’s performance is that she rode the team pursuit for only the third time at the international level, and second race with Glaesser and Whitten. “Mother Vie & I are thrilled to welcome Gillian on our Dr. Vie Superfoods BC team this year,” says Dr. Vie.

and http://www.ottawacitizen.com/Women+team+breaks+Canadian+cycling+record/6165649/story.html
“Anytime you ride under the World Record, you can be pretty happy. Setting a new Canadian record on top of what we did yesterday was absolutely fantastic. The British girls ran a great race, setting the new World Record, so I think we were in great company,” commented Gillian, the current Canadian Championship title holder in the Women’s Team Pursuit [Roorda, Brown, Carleton (all three Dr. Vie women)], 2008 and 2010 Provincial Time Trial Champion [BC] and 2009 Canada Games Road Race champion. 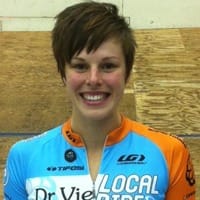 Gillian is competing at her career-second World Cup, and is completing the recovery of a fractured pelvis, which she broke during a crash in the Points race. Gillian went through five weeks of bed rest over the holiday period, before successfully completing a rehabilitation plan that was set up by the Canadian Cycling Team’s medical staff.

“I only started track cycling last summer. We were very thrilled to qualify first and accomplished exactly what we were here to do. We came in to today’s race with pretty much no stress, no pressure whatsoever. We just wanted to have a good ride, and show what we are capable of doing, and we certainly accomplished that objective,” added Gillian, in a post-race media interview.

“Mother Vie & I are proud of our women as they train and race around the world.  Join us at their events and if you miss out then tune in to my interviews with our amazing women. Steph Roorda and Laura Brown also from our Dr. Vie Superfoods team have been crucial in the Canadian Team Pursuit womens successes since 2009 leading up to this amazing year 2012 when all 4 (including Gillian Carleton and young Jasmine Glaesser) will be in London at the Olympics.  Each of these women are founding members of Dr. Vie Academy as we launch this weekend. Register now for your free 3 day online workshop, and learn how to reach your personal best in anything that you do,” says Dr. Vie