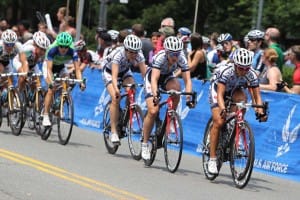 Crystal City, VA – Dr. Vie’s Joelle Numainville elite cyclist from Montreal of Team TIBCO USA nearly pulled off the sweep at the Air Force Cycling Classic, finishing 2nd today in the Crystal City Classic, the second race of the weekend. She finished just behind yesterday’s 2nd place finisher, Canadian Criterium Champion Leah Kirchmann. The two Canadians tied on points for the omnium, but the overall went to Kirchmann as today’s race served as the tie-breaker for the overall.

Dr. Vie TIBCO’s Joanne Kiesanowski finished 5th today after taking 4th yesterday, and the consistent results were good enough to put her in 3rd overall for the omnium.

“The Team definitely rode a really good race today,” said Team Directeur Sportif Lisa Hunt. “Whenever there was an attack, they were always there. The girls were a lot more aggressive today, as well, forcing moves and just staying on top of everything.

In fact, Megan Guarnier was awarded Most Courageous Rider for her efforts today. To watch Dr. Vie TV interview with Meagan click here. Megan is an adorable young woman, cute as a button with a heart of gold. 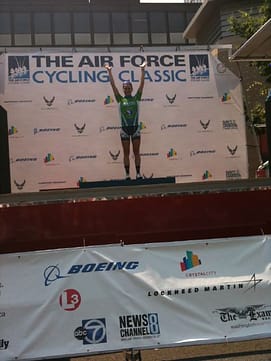 “It was another animated race, and there were lots of different breaks and combinations of people going off the front,” said Team Captain Meredith Miller. “There were several times when a break would stay off for a lap or two. I thought the break that I had at the end with Rushlee (Buchanan) maybe we would last.
Rachel Warner came across to us, and she went to the front and started driving the pace.

“But Rushlee and I both wanted our sprinters to come to the line today because they were the ones who had points toward the omnium. So we ended up sitting on. Then Tara (Whitten) and Lauren Hall came across. But Lauren was the only one in the group with points in the omnium so we didn’t want to bring her to the line either.”

Instead, with a little over a lap to go on the 2 km circuit, the group was back together, and the Team started setting up for the sprint.

Things got chaotic in the long sprint, where the finishing straight opens up more than 500 meters from the last corner.

“Joelle wasn’t feeling that great today, and it was really hot again,” Miller said. “Unfortunately, our lead-out wasn’t as organized as we’d have liked it. Joelle gave what she could today. She did well to finish second.”

The same squad heads to the upper Midwest, with Erinne Willock taking Tara Whitten’s spot, for the Nature Valley Grand Prix, which begins on Wednesday.

It is such an honour to noursish the bodies and the spirits of these amazing young women that hail from Canada, USA, Australia and Europe. Come meet our girls at the Canadian National Championships in Burlington Ontario 23-26 June. Joelle Numainville our Montreal girl is the current reigning champion. So she will be defending her title this year. Come see the fasted woman in the world on track Tara Whitten our girl from Alberta. Meet Erinne Willock our girl from Vancouver Island who has medals from Olympics to Common Wealth Games.

It is with the greatest humility that I share the lives of these incredible women who are led by two amazing women Linda Jackson (former Canadian Olympian ) and Lisa Hunt (Coach USA).