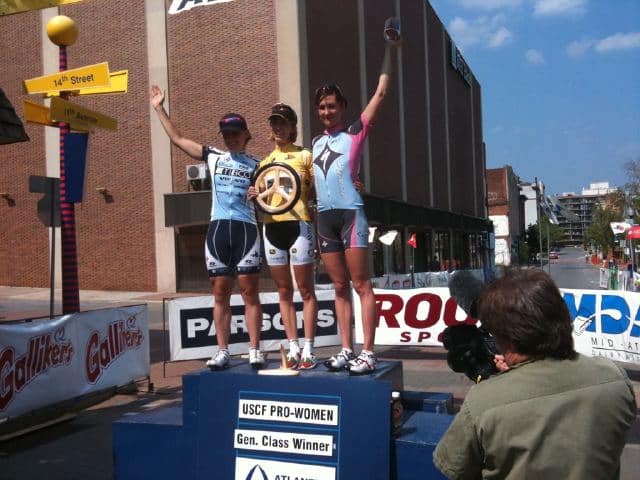 Altoona, PA USA – Following a crash Dr. Vie’s World Track Champion Tara Whitten of Team TIBCO stayed near the front of the bunch and avoided the carnage. For her efforts, she moved up to 2nd overall for the tour behind Janel Holcomb (Colavita). In real estate, they say location in everything. The same goes for bike racing, where proper positioning can mean the difference between winning and losing. A crash less than half-way through the 30-lap final-stage criterium in the Tour de Toona caught up race leader Veronique Fortin. And while she didn’t go down, she never made it back up to the front group.

Well before the crash split the race apart for good, Dr. Vie’s Team TIBCO was doing it’s best to put pressure on the race leader as well as the rest of the bunch.

“We were really aggressive from the start,” said Team Directeur Sportif Lisa Hunt. “We attacked from the gun and the field was pretty strung out from the get-go and the field started whittling down. Once Véronique was off gapped off, she lost 30 seconds pretty quickly and the gap just kept getting bigger. Once it got over a minute, that put Janel in the lead. We needed to get over two minutes to move Tara up. We had timed out the laps and they were coming in around 2:10. So we knew what we had to do.”

Unfortunately for Fortin, that meant lapping her, which the field succeeded in doing.

“Once we lapped Véronique, we told Tara to try to get away, but Janel was right on her wheel with every move,” Hunt said. “She put in a lot of efforts but just couldn’t get free.”

At that point, Dr. Vie’s Team TIBCO turned its attention to setting up sprinter Samantha Schneider for the stage win. Meredith Miller and Carmen Small set up on the front to lead out Schneider, but Schneider took off a bit too early out of the final corner onto the long finishing straight. She was able to hold on for 4th place, while Small continued on for 7th on the stage, moving up to 6th overall for the tour.

“The girls race really well again all weekend,” Hunt said. “It was a hard couple days in the middle after Tara won the prologue. Véronique rode great on Thursday to take the leader’s jersey away from our Tara. She was just super-strong on the finishing climb.

“Saturday’s race was just frustrating,” Hunt continued. “The stage wasn’t well marshaled and with the starts and stops that resulted, it was hard to mount a serious threat to get the jersey back. Even with all that went on Saturday, we still wanted to make the race hard today and try to get the jersey back. It wasn’t the perfect ending but we got close.”

Dr. Vie’s Team TIBCO junior Tara McCormick wrapped up an exceptional junior track national championships, taking gold in nearly every event she contested. Her haul: five golds, in the 500-meter time trial, the omnium, points race, flying time trial and sprint. The only race she missed the podium in was the scratch race, in which she took 4th. Way to go Tara.

We are truly honoured to be feeding these amazing women and juniors as they power their way to podiums as they race around the globe.

With lots of love and good wishes to all our women cyclists on Dr. Vie Tibco.