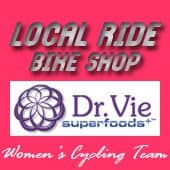 Team Local Ride / Dr. Vie Superfoods+’s very own Jasmin Glaesser is in the running for the spot of alternate on the Canadian National Women’s Pursuit Team that has been winning medals on the World Cup track cycling circuit and is ramping up for the 2012 London Olympics. Jasmin’s huge strides in the last two years that she has been cycling competitively continue to astound coaches and her fellow competitors.  All three women on the  Canadian Team Pursuit are Dr. Vie athletes : Tara Whitten, Laura Brown and Stef Roorda. 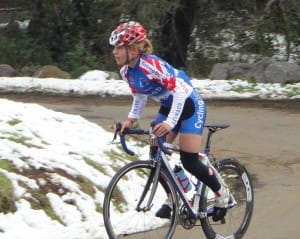 Jasmine’s Report:
“When I left Vancouver on an early morning in late January, I left behind unprecedented winter sunshine, to land two hours later in an oppressed, rainy L.A. Fortunately, this meterological conundrum was short-lived, as the next days brought with them plenty of Vitamin D. Of course, the nature of this trip was to ride circles at the ADT Event Center Velodrome, so really the weather conditions were inane except when it came to the enjoyment factor on my daily recovery spins.

Back to the riding. For those who don’t know, Canada has a pretty successful Women’s Team Pursuit squad, headlined by none other than double Track Cycling World Champ Tara Whitten. As we are nearing the 2012 London Games, and in general to ensure the future longevity of the team, the Canadian Cycling Association has put emphasis on creating a pool of riders that are capable – or near capable – of acting as an alternate in the event that one of the current team pursuit riders needs a time out.

This is where I come in, circling around the 250m track for a week in the hopes of becoming fast enough to train with the team, and maybe, just maybe, one day getting the chance to suit up in red and white and take my own spot on the start line. All good things are best in moderation though, so I relocated to the Santa Rosa area for a few weeks to get in some road training before flying back to L.A. in March. It has been very exciting to have the opportunity to train for the Team Pursuit and I look forward to seeing where this training will take me in the months and years to come.”