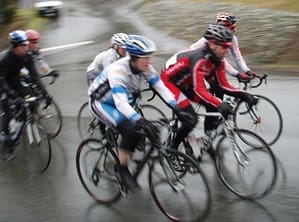 The Local Ride / Dr. Vie Superfoods+ Team riders launched their road season close to home at the Escape Velocity Spring Series on March 6 in Langley, BC. The squad competed in two more of the local races since, with Jenny finishing an impressive 6th in the B category last Saturday. In the Spring Series, racers compete in a mixed field, meaning Jenny out-sprinted a lot of men!  In other exciting LR/Dr. Vie news, Laura, Steph, and Jasmin are now in Apeldoorn, Netherlands for the UCI Track Cycling World Championships, along with their fellow Canadian team mates. 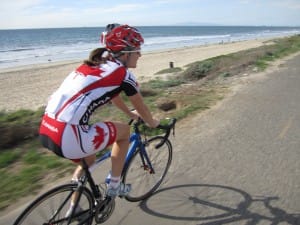 EV Spring Series is underway and stayed true to tradition with an extremely cold and rainy weekend of racing in Langley. Despite the ugly weather, Lisa, Rachel, Sarah and I bundled up on Saturday for our first race as a team. There were a couple of small breaks throughout the race, one of which I managed to latch onto, but, unfortunately, it didn’t stick. With two laps to go, one rider attacked and stayed away by himself, while Sarah and I worked together with a group of five other guys to pull him back. It wasn’t until the last 3km that Sarah threw in a monster pull and initiated a group effort to bridge the gap. Luckily, we caught him 500m before the finish and I sprinted to 6th place.

Sunday’s Armstrong Hill course, a.k.a. climber’s delight, was a whole new ball game, unfortunately, not weather-wise. The course was made challenging by a 3km climb followed by a bumpy false flat. While the B racers took the first couple of laps reasonably mellow, a couple of riders began pushing the pace up the climb on the 3rd and 4th laps. My luck ran out in the next lap, when I fell behind on the false flat, along with a small group of riders. Together, we rode hard to catch back onto the main pack, but the gap continued to grow, leaving us to finish the remaining 6 laps chasing the entire way. Meanwhile, Rachel put the hurt on the C racers and finished strong. All in all, it was a fun weekend of racing and we are looking forward to having more team mates join us this weekend in the Fraser Valley for round #4 and #5 of the series.

Laura and Steph have been training madly with Team Pursuit crewmate Tara Whitten (also Dr. Vie athlete)  to make sure they will be performing at their peak for the biggest race of the year – the UCI Track Cycling World Championships – in which they have a strong chance of winning a medal. Jasmin is along on the trip benefitting from a great training and learning experience.
Pictures courtesy of Tim S Rider
Check out photos of the Canadian Team in Apeldoorn on pedalmag.com here.