Dr. Vie Tibco Joëlle Numainville  from Montreal was a rockstar on the climbs at the GP Stad Roeselare in Belgium. Racing for the Canadian National Team, she crested the top of the Kemmelberg, the race’s hardest climb, just behind eventual race winner Amber Neben. We’re still waiting on official results but couldn’t hold off on bragging about her efforts. Congrats, Joëlle from all at home. 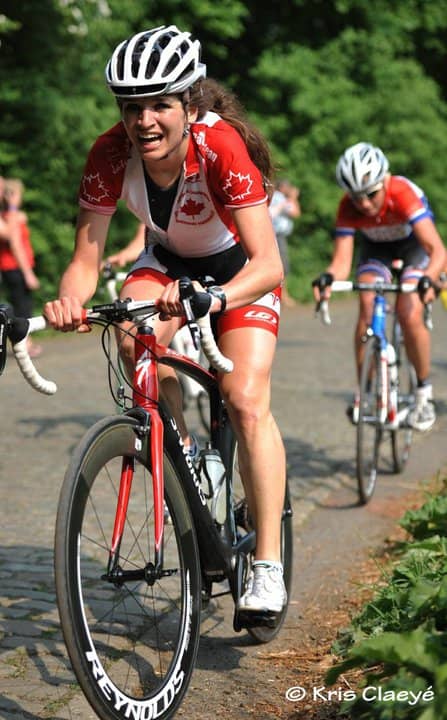 Rising like a monument from the rolling farmland of northern Belgium is the infamous climb known as the Kemmelberg. Named after the village of Kemmel on its eastern slopes, during World War One it was the scene of brutal slaughter. Now it is the focal point of the Gent-Wevelgem, one of the great Classics and whose two ascents of the Kemmelberg’s notorious cobbled pavement, or pavé, continue to court controversy. For if the riders must climb the Kemmel twice, they must also descend. With its 20 per cent gradient over unpredictable terrain, the Kemmelberg has witnessed some truly horrendous crashes, most recently in the Gent-Wevelgem of 2007.

But the race brings memories of  the Kemmelberg’s violent past. Famous now for playing the pivotal role in a bike race, the Kemmelberg saw thousands die during the First World War. At 159 metres high the hill is a key strategic point, and it came under attack during the 1918 Spring offensive by the German army. It was held by the allies but later lost, and in the fighting more than 120,000 lives were lost. So many that their memory cannot be set aside from the Kemmelberg, and the hill is littered with stark reminders of their passing.

Yes the World Cup action began in April in Europe with the European Spring classics, and Canada’s women are on the start lines once again this year. Six women have been chosen to wear the maple leaf while racing across Belgium and Holland. Some have already tested themselves against the best women in the world at these classics last year and will no doubt share their experiences with the newcomers.

Dr. Vie athletes include Joelle Numainville (Montreal), Erinne Willock (Vancouver Island) and of course Alison Testroete (Vancouver-now based in Holland).  Each of these young women are amazing athletes and role models for our youngsters indeed.

Whether it is over the cobbles in Drenthe, Netherlands or up the surprising hills of Belgium, each of the races has challenges the riders are looking forward to conquering.  The team is staying at the European National Team base in Tielt-Winge, Belgium between races.

In USA Dr. Vie Team Tibco girl  Samantha Schneider took the win in the Pro Women’s 1/2 race at the Whitnall Spring Classic in Wisconsin. She lapped the field with two breakaway companions before taking the field sprint to secure victory. Big weekend of local racing for Dr. Vie Team TIBCO before Gila and Speedweek!

Our girls are doing great…..in Europe and North Americas the past week.

Congrats to all from Dr. Vie Team in Montreal.

Join our Team Tibco Dr. Vie girls in Gatineau 19-22  May 2011. Visit our tent, meet our girls, get some hot tips from them about fitness and cycling and more.