Prisoner to President, an Ode to Madiba Nelson Mandela

The Soweto student massacre had happened  a few years prior. 20, 000 school children were peacefully protesting the introduction of Afrikaans into the schools.  By the end of that day several hundred were shot dead by the police force.  The first to be shot was 13 year old Hector Pieterson.  Madiba has cautioned the nation to remain calm and peaceful. 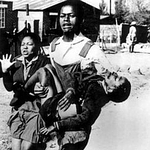 On another fateful day at the age of sixteen, during my first anti-apartheid rally, I realized that I was actually free even though we were non-whites and were given limited rights.  I realized the need for FREEDOM of the mind.

People can take away your money, they can beat you, they can imprison you, but they can never take away the FREEDOM of your mind.

Our Madiba Nelson Mandela was imprisoned for over 25 years…at that time.  He called for calm and peaceful demonstrations.

All the students from the pre-med group that I was in at the Indian university were expelled. Some students were taken away in the early hours of the morning and never heard from again.

That was my childhood in South Africa as a non-white girl in an apartheid regime.  Even though we were of Indian heritage, we were termed non-white, and were one of the three groups discriminated against: Indians, Africans and Coloreds. Although Indians were given more rights than the Africans at that time, we knew that the nation will be free only when all its people are free.  Madiba became the icon for freedom in the eyes of all even though he was in prison when I was born.

The situation was complicated because over 50 years ago the movement had started off as a passive resistance movement. But the over 200 tribes and African Chiefs found it difficult to control the diverse mindsets of the people. Until in 1961 they began to adopt more violent methods.   After Madibas imprisonment in 1962, it was told that he began to change and revert to his initial stance of peaceful resistance.  By that time, the nation was already incensed by injustice, poverty, lack of education, lack of housing and no right to vote.  By the time I was a young girl, the roots of Mahatma Gandhi and Madiba were well founded in the people. Inter-tribal fighting was however inevitable and spilled into the Indian communities….

It was not a simple matter of one or two cultures  in South Africa as it was in India – Hindus and Moslems seemed to be an easier situation than having over 200 tribes plus, Indians, Colored and Whites.  So many lives were lost needlessly in the fight for freedom.

If only the Dutch were humane and respected the divine law of human rights, untold suffering and death would have been avoided.  During Madiba’s 27 years in prison the nation was at the mercy of many forces and every race group endured pain and hurt.   People tried to forget the injustices and tried to continue their lives…….in an apartheid regime.  Time took its toll.

Years later when Madiba was released I cried like a baby as I watched him walk to freedom hoping that finally the nation can start the journey back to normalcy. We all knew and know that the journey will be a very tough one for every culture in South Africa.  When I voted for the first time in 1994 I prayed that we will move towards a peaceful nation…..but expected a rough road.

That was the era in which I lived in.

I am proud to have lived in their time because these men inspired me to be truly FREE in my mind as I worked and lived in 7 countries on my own. I’ve experienced so many challenges in my life, but the special moments of Madiba, Mahatma and my Father  have kept me going strong.

Mahatma Gandhi trod a profound path in South Africa, leading the Indians to burn their identity passes in 1908  and gaining more freedom in South Africa.  Finally that little loin cloth man led his country, India, the land of my lineage, to freedom through passive resistance. He ultimately wanted people to move beyond political freedom to spiritual freedom. But alas, people are not ready to let go of attachment to the mundane possessions of life.

My father, Mr. Vie was born in South Africa, when Madiba was already eleven years old. My father could not afford to finish high school and had to overcame all the challenges of being a non-white and discriminated against to rise above suffering and become a leading entrepreneur. He taught me that even with nothing, even with all the strikes against you, you can do your very best and make a difference peacefully, unarmed and without fear.

These are my 3 wise men – whose lives are lifelong inspirations to me…as I take the very best from each of their lives and meld it into mine and forge my own way in to the future.

Never give up.
One Soul can make a difference.
Be true to who you really are.
Be free in your mind.
It is our right to be FREE.

On this day, all three men have moved beyond that particular  lifetime on Planet Earth.

As Madiba’s Soul soars above South Africa and he sees the millions who shared in his life, and millions around the world who did not even know him the way we did, chant his name, he knows that he made a difference and changed a nation from one of chains to one of political freedom.

The legends of these 3 wise men will live on in the history of generations to come.

I was blessed to have walked the soil that they once trod on, in the land we call South Africa.

A South African in the time of Madiba Nelson Mandela.

Dr.Vie SuperKids program is a free program to mentor kids in South Africa

Dr. Vie SuperConscious program teaches you how to be FREE in your mind and beyond.