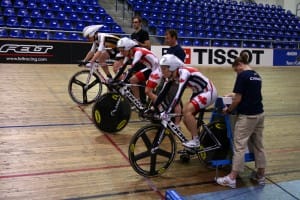 The trio of Whitten (Dr. Vie TIBCO athlete), Brown (Dr. Vie LR athlete) and Roorda (Dr. Vie LR athlete) have been training and racing together as Team Pursuit for over a year, with bronze, silver and gold medals under their belt.  Stef Roorda was replaced by Clara Hughes two days before their final World Cup in Holland today.  Stef is from Holland and her family were there to support her for this race. Clara Hughes was the starting rider for the race.(Apeldoorn, NED – March 24, 2011)

Here is the report from the Cycling Association: The 2011 UCI Track World Championships continued today, and it was the time for Canada’s Women Team Pursuit to shine against the world’s top teams.

The Canadian squad comprised of Tara Whitten of Edmonton, AB, Laura Brown of Vancouver, BC and Clara Hughes of Glen Sutton, QC placed sixth with a time of 3:27.255, running a good race in their first race as a unit.

“Each team member gave everything they had today, and we had really good communication during the race, which was very positive, said Tara Whitten after the race. “I think there is a feeling among all four of us here for the team pursuit that this is just the beginning. We have come a long way from last year, and although it doesn’t necessarily show in our final placing yet, I think we are now on the verge of a huge breakthrough!”

Laura Brown of Vancouver, BC was thrilled with the performance of the team in their first race.

“I would have to say the most positive experience of the trip was the support staff and coaches. They were all so UNBELIEVABLE on this trip. I had complete trust in all those surrounding me so that all I had to do today was get on my bike and ride as hard as I possibly could,” commented Brown. “It was the first time Tara, Myself, and Clara have raced before I think what we accomplished today is a good place to start.

“The fact that we are now in a position to choose the best athletes on the moment shows a lot of strength and depth in WTP in Canada. Its always tough when a rider is left out, but it is great to see new blood in the team,” said Richard Wooles, head coach of the Canadian Track Cycling team. Clara Hughes selection to the starting order brings in a new dynamic and an unknown quantity; we are all excited to see the team compete at the upcoming World Championships in Apeldoorn.

“We are currently in a position where we never have been before. Conducting time trials prior to a competition in order to select a team is certainly a great situation in which to find ourselves. This is one of the many signs that testifies to the strength of the Canadian track program led by Richard Wooles,” said Jacques Landry, High Performance Director for the CCA. “The four women that vied for a spot on the World Championship squad are all elite athletes with the potential and the ability to compete successfully at this high level.”

The 2011 World Track Championships will signal a return to competitive cycling for Clara Hughes. Her last major cycling race dates back to the 2003 Pan American Games, but she feels her progress has been steady, and sees the World Championships as an opportunity.

“As the saying goes, it’s just like riding a bike, albeit faster and a little bit more stressful with no brakes and in the team pursuit formation. This is a new event for me and it’s been awesome learning the nuances of it from Steph, Laura, Tara and Coach Tanya Dubnicoff, as well as Head Track Coach Richard Wooles,” commented Hughes. “Because I have so much experience with the team pursuit in speed skating, I seem to be picking things up quite fast and this is really motivating. The National Team has been very generous with their support and encouragement since I have returned to cycling and this I am also grateful.”

Today we of course naturally wonder: what would have been the results if the team who trained and raced together on Canadian Women’s Team Pursuit for over a year now, winning bronze, silver and golds around the globe, would have raced today in the home country of Stef Roorda, with her family watching and supporting her?  What if Team Pursuit rode as a team with Tara Whitten, Laura Brown and Stef Roorda? What would have happened?

Big hug to all including Stef Roorda. TO watch our Dr. Vie TV interviews with Tara, Laura and Stef click here.